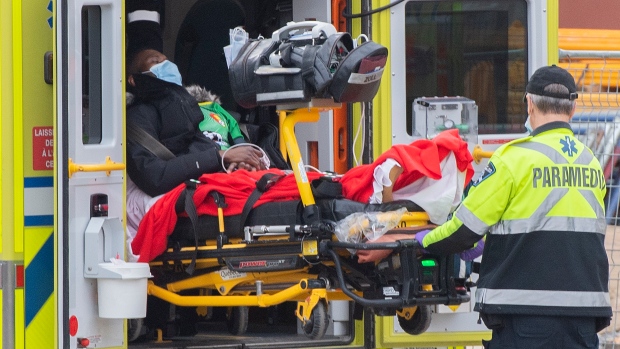 Omicron in Quebec hospitals: health officials warn that the network could soon be put to the test

MONTREAL – Quebec City health authorities are warning of a network overflow as Omicron cases “double roughly every two or three days,” according to the city’s director of public health.

“It’s a threat that is serious,” said Dr AndrÃ© Dontigny, adding that if cases continued to climb, the capacity of the health network to treat everyone could “deteriorate very quickly”.

While the daily rise of Omicron erases the record rates seen in Quebec so far, it is not yet known exactly when the province could reach the threshold of hospital overcapacity.

This is because healthcare workers themselves can get sick, according to health officials, although it is still not clear if Omicron is more contagious than Delta.

The health network is already grappling with a labor shortage. For the staff there, “our teams are exhausted by long battles against COVID, and currently, our teams are also affected by COVID,” said Dr. StÃ©phane Bergeron, Director of Professional Services and Medical Affairs at the CHU de QuÃ©bec.

As of Thursday, there were 111 hospital workers affected, according to Bergeron.

“Omicron is infiltrating our healthcare teams like no other viral form before,” said the head of the intensive care department at the University Institute of Cardiology and Pulmonology at Laval University, Dr. Mathieu Simon.

“This is the great uncertainty.”

Dontigny called on residents to do their part to limit the spread. Quebec has already reduced the limits for indoor gatherings, but “if you have the possibility of reducing these contacts much more, we highly recommend it,” he said.

â€œThe players in the health network are at the forefront of this fight, but we cannot lead it alone, we need the support of the population.

ChaudiÃ¨re-Appalaches remains the most affected region in the province, with a rate of 700 cases per 100,000 inhabitants, according to the National Institute of Public Health of Quebec.

The region’s director of public health, Dr Liliana Romero, described a “critical situation” linked to a “meteoric increase in cases”.

Residents have faced delays in getting tested for the virus. â€œWe have exceeded our capacity for testing centers,â€ said Romero, who called on people to be cautious if they suspect they have COVID-19.

â€œIf you have symptoms, stay home,â€ she said.