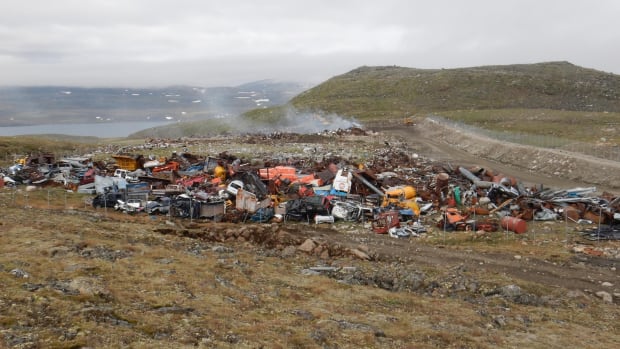 In the village of Inukjuak on the northeast shore of Hudson Bay, trash isn’t something that disappears into a distant dump in the back of a garbage truck. He stays nearby. Then it burns.

“Domestic waste burning is a big problem in my community,” Shaomik Inukpuk, the city manager of Inukjuak, told the Quebec Environmental Review Board, the Office of Public Hearings on the Environment (BAPE), last June during consultations with Aboriginal communities in the North.

He wasn’t the only one raising the issue.

During the consultations in Quebec, the Inuit and Naskapi communities expressed their concerns about the waste problem.

North of the 55th parallel, permafrost means the ground is too hard to dig landfills. As there are no incinerators, the waste is burned in the open air. There are 14 such landfills in Nunavik, one for each community.

Quebec law requires that waste be burned “at least once a week, weather permitting” in order to control the amount of waste and “to prevent wild and domestic animals from spreading waste materials”. Burning is also believed to prevent toxins from seeping into the ground.

But the BAPE report, made public last month, raises concerns about this practice and its impact on the health of neighboring communities and the environment.

And given what is at stake, the BAPE says it is surprised “that no public health study has been undertaken so far in Quebec to document the levels of environmental contamination and exposure of populations” living near northern landfills.

No rule on the distance from dwellings

The regulation does not set a minimum distance between homes and landfills in the North — and most of these landfills are located a few kilometers from villages.

But in some cases, such as Inukjuak and Kuujjuarapik, they are only a few hundred meters from the nearest homes, “within the community itself”, according to Inukpuk.

This means that garbage smoke regularly wafts over nearby people, as well as the animals and fish they depend on for food.

“The smoke is not safe for our environment. Because the people who live here still depend on traditional food, they have to go fishing, they have to go hunting, the source of food they seek is compromised by the smoke. landfill,” says Inukpuk.

When the BAPE published its 698-page report on the waste situation in Quebec last month, it devoted a chapter issues facing northern Aboriginal communities.

It confirmed what many northerners already suspected: it can’t be good to have garbage to burn right next to it.

The report points out that household waste piled up in a small landfill is difficult to burn properly. Thus, waste fires “reach temperatures too low to produce complete combustion and consequently generate large quantities of particulates and numerous contaminants, including polycyclic aromatic hydrocarbons, dioxins and furans”.

He cites research that indicates smoke can easily reach surrounding communities when pushed by headwinds.

Ecocentres to collect things like toxic materials, batteries and old car parts are extremely rare in the North. Although people aren’t supposed to throw away toxic materials, they don’t have many safe options. It is difficult to know exactly what is in the trash bags that are picked up.

“Ground burning practices are indeed considered a threat to the health of local populations due to the numerous releases of potentially toxic contaminants,” the BAPE report states.

According to a federal government flyer, open burning of garbage can cause health problems, including headaches, nausea, and rashes. Exposure to certain toxic chemicals found in smoke, such as dioxins and furans, is associated with certain cancers and impaired immune, endocrine, and reproductive systems, among other effects.

“The potential risks for the health of neighboring communities are therefore real, particularly among the most vulnerable groups such as children, the elderly and people already weakened by health problems”, indicates the BAPE report.

Quebec’s health ministry said in an email that it was “aware of the health impacts associated with northern landfills.”

The BAPE indicated that in the absence of data, it is “imperative” to document the exposure of neighboring communities “to the contaminants emitted by such burning”. And he said he wants the provincial environment ministry to also look at how land and wildlife are being contaminated.

The Ministry of Health affirms that the BAPE’s recommendations deserve to be analyzed but emphasizes that to date, “no public health issue related to northern landfills has been brought to our attention”.

But, last June, when the BAPE asked a representative of the ministry, Koffi Banabessey, how he evaluated the priority of a study on the question on a scale of one to 10, he was adamant.

“The priority would be 10,” Banabessey said, “because that would be very important.”

Still, the ministry has no concrete plans for a study any time soon, in part, he says, because “the context of the pandemic has not allowed the necessary resources to be allocated to this file.”

The problem, however, dates back to long before COVID-19.

“Several of these sites opened in the 1980s are almost full today,” notes the Kativik Regional Government (KRG), in its latest Nunavik Residual Materials Management Plan, completed in 2015.

But the Kativik government has not asked the Quebec government to study the health impacts of northern landfills, according to Véronique Gilbert, assistant director of environment and land use planning at the KRG.

This does not mean that Kativik does not see this as a problem.

“Certainly the open burning of things, potentially plastics or materials that can be hazardous or emit gases hazardous to health, is not ideal,” Gilbert said.

“What is not permitted elsewhere in Quebec should not be tolerated in Nunavik,” says the Makivik Corporation, which represents the Inuit of Nunavik, in a brief presented to the BAPE in June.

“We urge the Government of Quebec to take action to support our region in adopting safer practices to reduce these risks and protect the health of our communities.”

Virginie Noël-Aloise, environmental health advisor at the Nunavik Regional Board of Health and Social Services (RRSSSN), described a typical burn.

“Most of the time, the combustion temperature is too low. The waste is not always sorted. … sometimes we start a fire in the morning, and 15 minutes later, the wind changes, and then the smoke goes directly into the smoke. communities,” she said.

She listed the potential health effects of open burning of waste for the BAPE.

In the short term, they include impacts on the respiratory system, such as irritation of mucous membranes, worsening of asthma and coughing.

Potential long-term effects reflect federal warnings about certain cancers and impaired immune, endocrine, and reproductive systems. But these are “not really applicable to Nunavik, since most of the time they are short-term exposures” for the populations, specified Noël-Aloise.

And there’s “the smell,” she added. “It’s not a health risk, but it’s an discomfort that people complain about, and it’s mostly related to the smoke when the winds are the other way.”

Still, the health board has heard of no official complaints.

“We mainly hear about nuisance, whether it’s unpleasant odors or eyesore,” the council said in an email. “There is no evidence or link between these nuisances and health problems in Nunavik.”

But “having no data, it is currently impossible to make the link between the health problems experienced by the population and the northern landfills in Nunavik,” specifies the NRBHSS.

When asked if it had asked the Department of Health to conduct such a study, the health board said it wanted to study the matter.