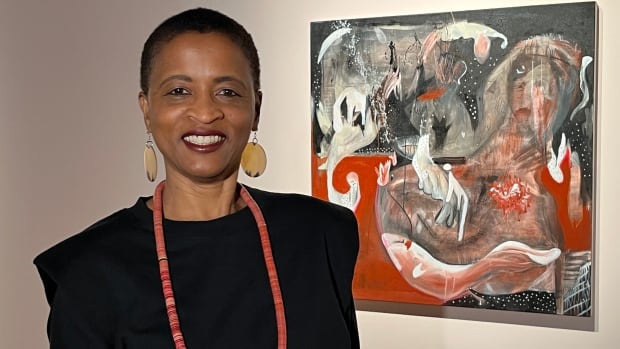 Dominique Fontaine doesn’t mince words about how Haitian artists have been sidelined from the Quebec art scene.

Although they’ve been in the province for decades and constantly show their work, Haitian artists have only recently begun to make a splash on the mainstream scene in Montreal, Fontaine said.

She said many art world institutions have come to account in 2020 after widespread protests against anti-black racism — and now they’re looking for black and Haitian artists, who previously went unrecognized.

“People do their my culpathey open doors for artists who were underrepresented, overlooked,” Fontaine said.

“We are here, we are present and we can no longer be ignored.”

From now on, Fontaine puts them at the center of a new exhibition. Sovereign Imaginaries presents 15 Quebec and Canadian artists of Haitian origin and is available in two places: the Janine-Sutto House of Culture and Galerie Hugues Charbonneau.

“We had to capture him.”

Hugues Charbonneau, the gallery’s owner, said the Haitian community has long been waiting for some recognition on the Canadian art scene.

“Manuel Mathieu, an artist I worked with, he was the first Haitian artist to be brought together at the Museum of Fine Arts,” he said. “It was three years ago!”

Charbonneau said some of the Haitian artists from Quebec here have gone abroad. Gelsy Verna, a Haitian-born visual artist raised in Montreal, had a successful teaching career in the United States until her death in 2008. But here?

“She is not part of any museum collection, she is not known to the public,” Charbonneau lamented.

Stéphane Martelly, painter who creates under the name of Nou, knows the feeling. She said Haitian artists in Quebec have long struggled with Haiti’s bold artistic culture, while not being recognized for their work.

“Institutions are catching up with us and following the agenda, so to speak, and realizing that there’s all this vitality that needs to be visible,” she said.

Esther Calixte-Bea, a young university graduate, is one of the artists participating in the exhibition.

“Being part of this exhibit is an amazing feeling,” she said. “Being around other Haitian artists, seeing colorful and interesting works…it’s so empowering for me.”

Fontaine, the curator, said seeing all the art together shows that Haitian artists bring “a new energy,” an energy that has flourished despite having gone unrecognized for so long.

This is partly what inspired the name, Sovereign Imaginaries.

“The title means it’s unrelated. The imagination, the artist’s ways of thinking, of expressing themselves…the artist finds ways to create, against all odds,” she said. declared.

The show kicked off this week and is expected to run until mid-January.