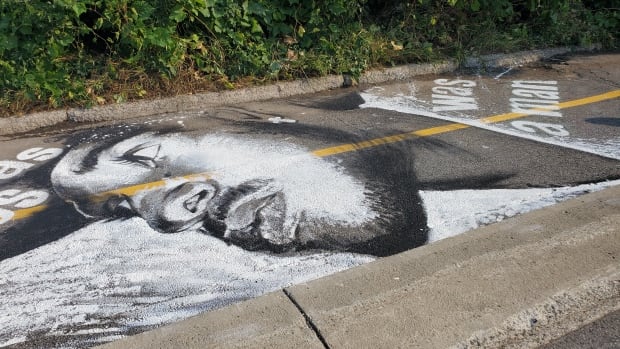 It has been three years since Nicholas Gibbs, 23, father of three, was shot and killed by police in the Notre-Dame-de-GrÃ¢ce neighborhood of Montreal. On Saturday afternoon, a mural in memory of Gibbs was unveiled on the bike path where he was hit by two bullets, near the corner of boul de Maisonneuve. and avenue Montclair.

On either side of a stenciled painting of his face, the mural reads: “Nicholas Gibbs was a man”. There are white footsteps showing where Gibbs tried to get away from the police and blue footsteps showing the four officers standing around him on the night he died.

Members of the local black community say there is still a lot of work to be done to change the way police interact with black people and those struggling with their mental health.

Gibbs’ death was the subject of an investigation by Quebec’s police watchdog, the Bureau of Independent Investigations (BEI).

Police said Gibbs was coming towards them with a knife and officers opened fire after an unsuccessful first attempt to subdue him with a taser and pepper spray.

His family filed a million-dollar lawsuit against the city of Montreal, arguing that police used “excessive and disproportionate force” against the man, who suffered from mental health issues.

Strength in the community

RenÃ© Bernal, director of operations for Notre-Dame-des-Arts, one of the organizations behind the mural, said Saturday’s event was aimed at paying tribute to Gibbs and reiterating calls for change.

“It’s not the first and it feels like it won’t be the last,” said Bernal, referring to black men who were killed by police in Montreal.

“We decided to create this project … to show our respect, to show our strength within the community,” he said, “to defend the memory of someone who mattered.”

Dozens of people attended the ceremony, some shedding tears as they listened to poetry, musical performances and listened to Gibbs’ mother Erma Gibbs.

Bernal says the mural and ceremony were part of a partnership with the National Film Board. The NFB is producing a documentary on the life of Nicholas Gibbs, the circumstances surrounding his death and how police practices must change.

“This film is called The night watches over us“Said director Stefan Verna.”[It’s]… about how black bodies are watched, especially at night – that’s when Nicholas was killed. “

Verna says black people believe police often act with impunity and are not equipped to deal with anyone with a mental health crisis.

He hopes the film, slated for release in 2022, will spark a conversation. More importantly, he says he would like this conversation to lead to a review of the police as a whole.

â€œThe story begins with Nicholas but really concerns us all,â€ he said, â€œand it is because of the power and resilience of families and community that [we’ll] unite to fight for police reforms.

The battle for Quebec could be a liberal-bloc confrontation, but surprises still possible