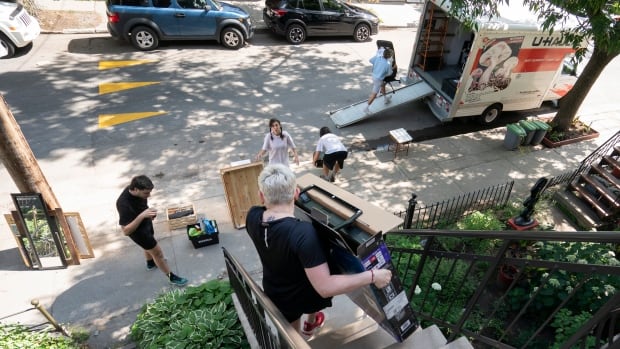 More than 500 Quebec households are homeless after moving day, according to a housing group

A day after the move to Quebec, more than 500 tenant households in the province are homeless, the highest figure in 20 years.

The social housing group Popular action front in urban redevelopment (FRAPRU) unveiled the data in its annual report on Friday, spokesperson VÃ©ronique Laflamme qualifying the portrait of the current housing situation as “rather gloomy”.

According to recent data collected from municipal assistance services, the distribution of homeless individuals or families is:

FRAPRU says the numbers are probably even higher. Tenants who live in areas where there are no municipal support services are not counted, nor are those who have decided to fend for themselves.

Last year, 373 households – from single renters to entire families – were without a lease on July 2 across the province.

Laflamme says housing availability is only part of the problem. Rising rents is another obstacle, as demonstrated by Montreal.

â€œThe vacancy rate is 3.2% in the city of Montreal, which is above the breakeven point. However, no less than 554 tenant households used the municipal housing office’s referral service this year, â€said Laflamme. . “This situation speaks volumes about the depth of the crisis.”

Even those who have found a home are going through difficult times. FRAPRU says tens of thousands of households have had to cut other essentials just to pay rent.

The group says things could get worse if the provincial government does not take immediate action.

FRAPRU calls for additional investments in AccessLogis program, the launch of a vast project of 50,000 social housing units in five years, and better protection of tenant households against evictions, repossessions and excessive rent increases.

In the meantime, the group welcomes improvements to emergency aid programs in the province, including the service in Montreal which offers temporary accommodation and provides assistance with storage and moving.

The group also says that while it appreciates the Quebec government improving its services, measures to help tenants were announced too late to be properly implemented in cities where they did not previously exist.

More than 6,600 housing units built or in progress

Quebec’s Ministry of Municipal Affairs and Housing said the government was working to increase the supply of housing in all regions of the province. The process includes the presentation of a new version of the AccÃ¨sLogis program to make it more efficient and the construction of 15,000 social housing units.

â€œUnder our government, in just over two years, we have invested more than $ 730 million and more than 6,600 housing units have been built or are under construction,â€ declared BÃ©nÃ©dicte Trottier Lavoie, spokesperson for the ministry. in a statement emailed to CBC Montreal.

Regarding â€œrenovationsâ€ – a term housing advocates use to describe tenant eviction in the name of renovations, Lavoie said a tenant cannot be permanently evicted for simple renovations.

But for people like Camille Boyes-Manseau, who had the opportunity to move for eight months while her apartment was being renovated in July, she found it easier to move permanently than to wait.

But she said finding her new apartment in Verdun was no easy task.

“It took a long time, that’s for sure,” Boyes-Manseau said. She described the process as spending every free minute on different sites, checking messages and responding to announcements.

Finding a place in your budget is even more difficult, she said. “You can still find these rare gems that work, but it’s not as easy as it used to be. It was really stressful.”

“We are doing everything we can”

In Montreal, teams from â€œall the boroughsâ€ actively support people who do not yet have a lease, with 33 households in temporary housing, according to Craig SauvÃ©, municipal councilor for the Sud-Ouest borough and associate housing advisor. to the executive committee.

The city has also reserved 50 apartments to help people find permanent accommodation and people can call 311 if they need help finding a place to move.

“Our plan from the very beginning was to leave no one left without a place to go and to make sure they were looked after,” said SauvÃ©, who also says the long-term solution to the crisis of housing is more affordable housing, which requires spending on the part of the province.

“We are doing everything we can.”

Hydro-Quebec engineers win a telework grievance with a crown corporation