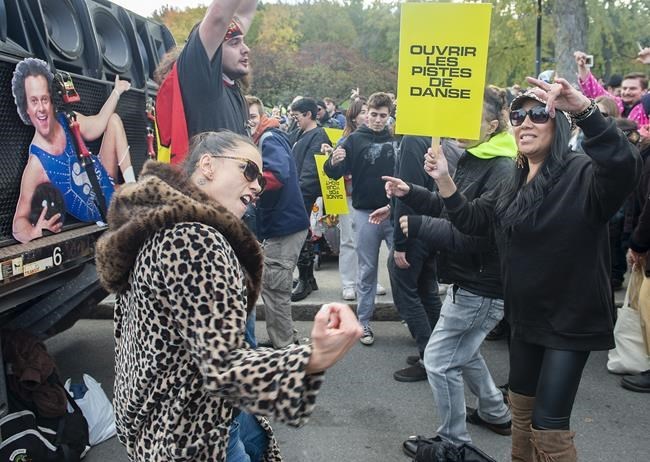 MONTREAL – A large crowd of Montrealers organized a big dance party on Mount Royal on Saturday to urge the Quebec government to lift its ban on dancing in bars and clubs.

MONTREAL – A large crowd of Montrealers organized a big dance party on Mount Royal on Saturday to urge the Quebec government to lift its ban on dancing in bars and clubs.

DJ blew music into loudspeaker as protesters donned glittering wigs, jumpsuits and costumes as they rocked to the beat of the music and waved signs reading “Dance for the Right to Dance “.

Alex Stojda, who showed up with friends, said Montreal is one of the last big cities in the western world where dancing is not allowed, despite one of the highest vaccination rates.

“We are ready, we are responsible people, we are all vaccinated and we just want to be able to try to get back to normal a bit and have fun,” he said.

Stojda said he understands the public health concerns associated with dancing, but that there have been enough indoor events in recent months to prove that it is possible to do things safely if the precautions are respected.

Several people in the crowd said it was unfair for the government to allow large venues such as the Bell Center to reopen at full capacity for concerts and hockey games, but clubs and bars cannot open their tracks dance to much smaller crowds.

Melanie Leeson said after seeing some 20,000 people in the Bell Center stands for a recent Montreal Canadiens game, she believes the government ban discriminates against those who enjoy the nightlife.

“I feel like if we’re at a point where we can be in such a large crowd indoors, I don’t see why nightlife can’t be allowed if people are following health measures.” , she said.

Quebec and British Columbia are the only two provinces that continue to ban dancing in bars and nightclubs under their COVID-19 regulations.

Quebec has said it is taking a gradual approach to lifting restrictions on the pandemic, and experts have said dancing can be dangerous due to lack of distancing and other factors.

But those at the protest said the ban had gone on long enough and it was time to let people relax and have fun – with precautions in place such as proof of vaccination.

Several mentioned that dancing, for them, is more than a frivolous activity: it is also being part of a community and doing something that brings them joy after almost two years of the pandemic.

“It’s time for fun and joy, and that’s what dancing is all about,” said Sophie Trolliet, who was standing on the Mont-Royal lookout holding a sign.

Leeson, for her part, said she missed being with the dance community, which she described as “warm, welcoming and non-judgmental.”

â€œI miss the feeling of that community, of being free on the dance floor, because that’s really the reason people go there: to escape the hardships of the world,â€ she said. “And I really miss it.”

This report by The Canadian Press was first published on October 23, 2021

What you need to know about COVID-19 in Ottawa on Sunday, October 24