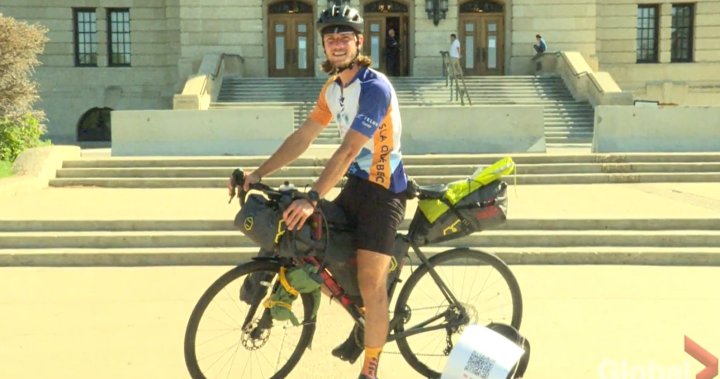 If you happen to be traveling along the Trans-Canada Highway in the next few weeks, you might spot a certain 24-year-old cyclist on a fundraising and awareness mission for ALS.

Hugo Lambert, a criminology student at the University of Montreal and a member of the school’s cycling club, is currently cycling across Canada for 50 days, nearly 5,000 kilometers from Vancouver to Montreal.

His tour began July 18, and now Lambert is crossing the Prairies.

The goal of Lambert’s trip is to raise $50,000 to support research and those suffering from amyotrophic lateral sclerosis (ALS), commonly known as Lou Gehrig’s disease.

Lambert said ALS, a fatal degenerative disease that causes progressive paralysis of all muscles in the body, was responsible for her mother’s death in 2020.

He created his project named Ride for ALS – TransCanada 2022 to honor his memory – to raise awareness of ALS and support those living with the disease.

Under the name U GO TRAVEL, Lambert hopes to raise enough funds to advance ALS research.

On Monday, Lambert arrived in Regina as part of his fundraising tour.

He said that while cycling through the Rockies was a challenge for him, he admitted it was no picnic riding the Prairies.

“The Rockies were more physically demanding, but Saskatchewan is really tough mentally,” smiles Lambert. “Sometimes when you’re alone, you’re really alone, so you have to be your own friend or talk to the cow and make it easy for her.”

Lambert said the money he raises from his tour will be donated to the ALS Society of Quebec and the Association for ALS Research in France, where he is from. Initially, he set a fundraising goal of $5,000 and €5,000 for each respective association.

He said he hopes the money he can raise will help researchers one day find a cure after what he saw his mother go through.

“It’s a terrible disease and there’s no solution. I wanted to do something good for her,” Lambert explained. “I’ve been through the disease and it’s really hard. other people would be great.

Lambert said he was blown away by the support he has received so far, as he has already raised $40,000, prompting him to set a new goal.

“Hopefully I will reach my goal of $50,000. I wasn’t sure if I would be able to, but now I’ve met a lot of great people along the way and I feel more confident,” he said. Lambert added.

“This trip is wonderful. I discovered myself, I discovered the world, other people, other cultures and, of course, Canada.

Anyone wishing to support Lambert’s cause can make a donation on his page to the ALS Society of Quebec or to the French Association for ALS Research.

People can follow Lambert’s journey on her Instagram page. He also invited people to cycle with him for a few miles, if they are interested in supporting him that way.

The ALS Society of Saskatchewan says there is still no known cure or effective treatment for ALS and that approximately 2,500 to 3,000 Canadians are currently living with the disease.

In Saskatchewan, the province has approximately 200 to 250 people diagnosed with ALS at any one time.

The company itself tends to have between 70 and 100 customers each year.

Denis Simard, executive director of the ALS Society of Saskatchewan, said they know not everyone with ALS is diagnosed correctly.

“It’s what we call a disease by elimination, so you have to remove a lot of other diseases and options from the equation to find out that someone has ALS,” explained Simard.

“Unfortunately, sometimes a lot of people are misdiagnosed for a long time, especially those who come from smaller or rural communities where many doctors don’t have much experience with these neurodegenerative diseases.”

Saskatchewan is statistically on par with the other provinces, according to Simard, adding that there is one ALS clinic in the province based in Saskatoon.

He said there needs to be more awareness of the disease itself in the province so residents can understand the warning signs.

“It’s not just signs of aging and things hurt a little more. It’s really that you can’t do it. The disease progresses so quickly that you could kick a soccer ball one week and the next week you can’t seem to grab or hold the ball,” he said.

“If you’re not sure, talk to your doctors and our website has a ton of resources.”