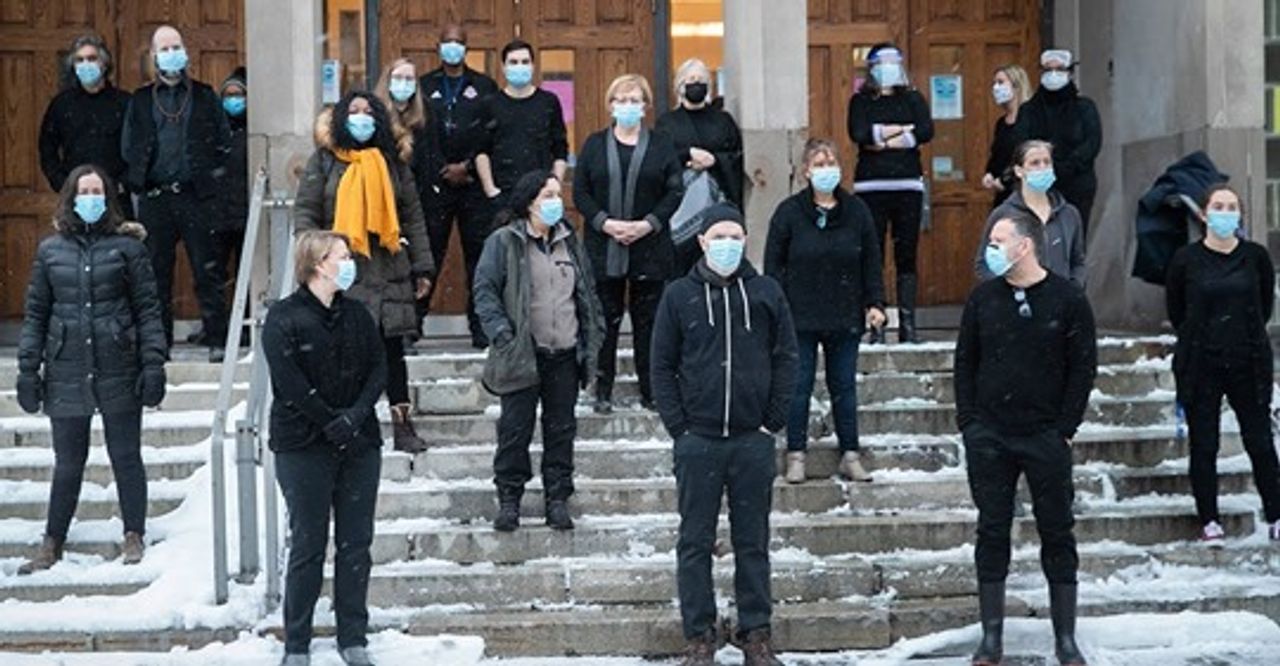 Provincial governments in Ontario, Quebec, Manitoba and Nova Scotia want to force millions of children, teachers and support staff into classrooms on January 17, even before the peak of the fifth wave of the pandemic caused by Omicron has been reached. the World Socialist Website urges educators and all workers to resist this homicide decision, which will lead to hundreds of thousands of infections and thousands of additional hospitalizations and deaths. They should be planning mass walkouts and strikes to close schools to in-person learning as part of a global strategy to stamp out COVID-19.

The imminent reopening of schools in Canada’s most populous provinces, Ontario and Quebec, follows the decision of the governments of the New Democratic Party of British Columbia and the United Conservative Party of Alberta to resume the classroom instruction last Monday.

The reopening of schools in Western Canada has already sparked powerful resistance from educators. Four teachers at Armstrong Elementary School near Vernon, British Columbia, filed unsafe work claims last week, citing poor classroom conditions and an insufficient supply of masks, forcing the school to close for two days . Teacher absence rates in interior British Columbia have risen sharply this week, no doubt due to a combination of increased COVID infections and opposition to the reckless reopening of schools.

In Alberta, the Calgary Board of Education reported a shortage of 681 teachers, with 208 unfilled on the first day of school. In Edmonton, 454 teachers and 252 teaching assistants were absent on the first day. While many of those absences are undoubtedly related to COVID-19 infections, many other educators are clearly voting with their feet.

Public anger among parents and education workers has boiled over in response to the openly pro-corporate justification for sending children back to overcrowded and poorly ventilated classrooms that are primed to spread the virus. Governments’ utter disregard for children, education workers and their families has struck a chord with the working class, which is quickly launching into an open struggle against these herd immunity policies.

As one Twitter user, Mat Wright (@matpVI), from Nanaimo, BC, tweeted: “This is not public health, this is public death. Do better… DBH [BC Chief Medical Officer Dr. Bonnie Henry] sets up generations for the evil of Long COVID.

With the blessing and encouragement of the federal Liberal government led by Justin Trudeau, the provinces are determined to keep schools open amid an unprecedented tsunami of infections and spiraling hospitalizations and deaths so that parents are freed from their child care responsibilities and can go to work that produces profits for Canadian businesses. Government officials and public health officials are increasingly arguing that mass infection is a positive good because it will produce “herd immunity.” In truth, allowing the virus to spread so quickly has brought the healthcare system to the point of collapse, forcing hospitals to ration care to the detriment of patients’ health and lives, while creating perfect conditions for it mutates, potentially producing even more virulent variants.

The only conclusion that can be drawn from looking at the school reopening rules is that the provincial governments of Toronto and Quebec want as many educators and students to be infected as possible. The Ontario government announced earlier this month that it will no longer collect or report cases among students and staff. Authorities in Quebec are also reducing the registration of cases, and it is unclear whether they will continue to publicly report cases in schools. Parents in Ontario and Quebec will no longer be notified of outbreaks in their children’s classrooms. If an infection is recorded in a school, students in the same class will no longer be sent to quarantine. The Ontario government said public health officials said a notice would only be sent to parents if more than 30 per cent of staff or students were absent.

A memo from the Ontario Ministry of Education to school boards cynically stated that in the event of “high rates of expected absenteeism” among staff, schools could “combine classes and assign students to different classes to provide supervision. In other words, the ministry is ordering schools to create superspreader events by increasing already large class sizes from 25 or 30 students to 40, 50 or 60 in poorly ventilated rooms.

In Quebec, where the government admits that a “very large” number of school staff will be affected by COVID-19, schools are being ordered to develop contingency plans to bring in parents who do not have absolutely no teacher training “to keep an eye on” classrooms. This proposal alone explodes the falseness of claims by the ruling elite that schools must remain open to in-person learning for the sake of children’s education and mental health. The dirty truth is that the political establishment and the corporate-controlled media view schools as warehouses where students are “supervised” by whoever can “keep an eye on” them while their parents produce profits at work for the big enterprises.

The Coalition Avenir Québec government also refuses to provide N95 masks to teachers and justifies it with the false claim that surgical masks are just as good. Teachers may also be ordered to lead two classes at a time with the support of a parent in the event of staff shortages.

This deadly class warfare agenda threatens a health care disaster far worse than anything seen since the pandemic began. If the ruling class is successful, pediatric hospitalizations and deaths will increase, and countless children will suffer from the still poorly understood effects of Long COVID.

Cases of COVID-19 caused by the Omicron variant have been shown to cause more severe disease in children. Due to the federal government’s slow approval of vaccines for children, the majority of Canadian children are unvaccinated or have received only one dose of the vaccine, making them more vulnerable to the disease.

Even before schools reopen, the situation in Ontario and Quebec is dire.

In Ontario, hospitalizations and intensive care admissions stand at 3,814 and 527 respectively, a jump from the previous week. The same figures for Quebec are 3,085 and 275. Ontario recorded 46 deaths on January 12 and Quebec 62 deaths on January 11, two peaks for the current wave that are close to the peaks of previous waves, when a much smaller proportion of the population was vaccinated. .

Rejecting all calls for distance learning, unions have responded to deadly reopening plans by complaining that they were not involved in drafting the rules to keep schools open. At the same time, they have made it clear that they will do absolutely nothing to mobilize their members to protect their health and their very lives. This is in line with the role of unions throughout the pandemic, which has been to lead the back-to-school push by the ruling elite and to sabotage any opposition to dangerous in-person learning by educators and workers. . They are working again to control the return to school, even if it will mean infection, the crippling effects of Long COVID and the death of many of their members.

In Alberta, three public sector unions, including the Alberta Teachers’ Association, wrote an open letter to right-wing United Conservative Party Premier Jason Kenney this week, urging him to impose what they called “circuit breaker” measures. These measures are anything but the containment necessary to stop the spread of the virus. Unions have explicitly ruled out school closures, saying children should only be sent home for remote learning as a “last resort” if all else fails. The manufacturing and resource extraction sectors have also been exempted despite numerous outbreaks. Predictably, the Kenney government immediately dismissed this appeal out of hand.

The working class of the world is coming into open confrontation with the government, the provider of disease and mass death, and its union minions.

A strike by thousands of Chicago teachers, outraged at being sent to class as the Omicron variant broke daily infection records, led to schools being closed for several days until the Chicago Teachers Union brokers a miserable deal with a Democratic Party city government that sent teachers back to work before they even had a chance to vote on it.

Across the United States, education workers and students have staged walkouts and work stoppages to demonstrate that they will not be slaughtered like lambs for corporate profit. A day-long national teachers’ strike in France on Thursday was driven by the same sentiment.

Educators in Ontario, Quebec and across Canada must join this movement and seek to spearhead a much broader mobilization of the working class. What the first two years of the pandemic have demonstrated is that the fight against the virus is a political fight – a fight against big business and their political mercenaries who, in pursuit of their own selfish economic and geopolitical interests, seek at all times to block the science-based capital measures needed to save lives.

Mass walkouts and strikes must be prepared to close all schools to in-person learning as part of a Zero COVID strategy that includes shutting down all non-essential production with full wages paid to all workers, and a comprehensive program of public health measures to eradicate transmission of the virus and care for the sick.

We strongly urge all teachers who wish to fight for this program to contact the Pan-Canadian Educator Base Safety Committee at [email protected] and plan to attend its next public meeting on Sunday, January 23 at 1 p.m. EST.

Get updates and information on the fight against the dangerous reopening of schools.