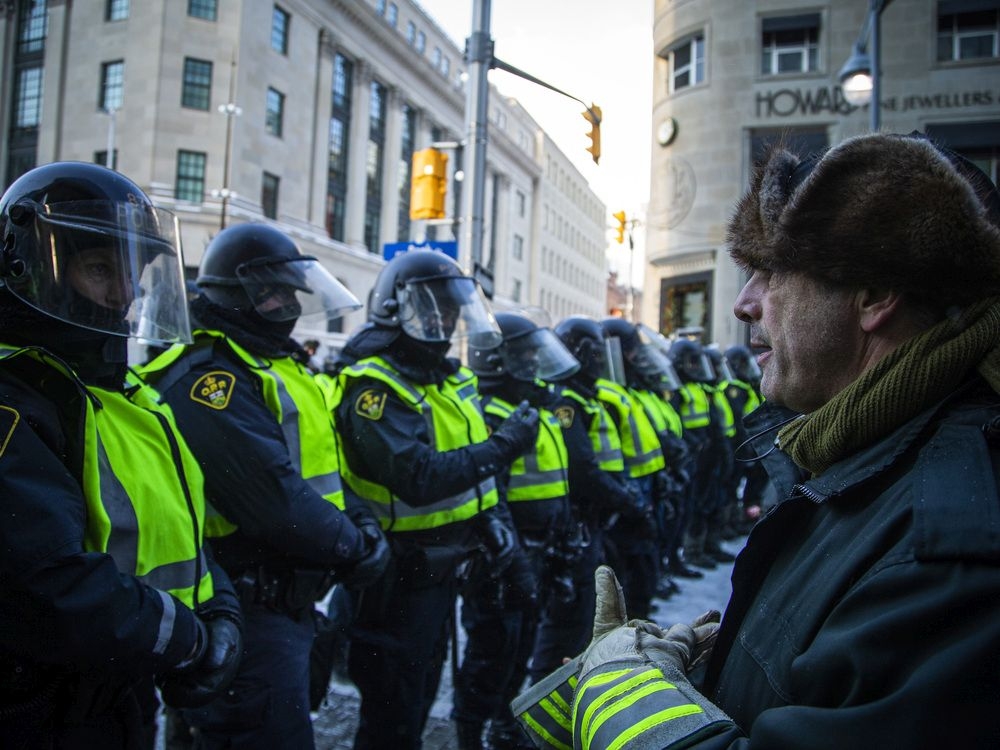 Leong: The widespread police brutality during the occupation of Ottawa? Barely

What short memories we have.

In recent weeks, complaints have been filed by participants in the anti-government occupation near the Parliament Buildings in Ottawa about the muscle police.

Watching it all unfold from afar and having covered a number of major protests early in my career as a journalist, I found these accusations rather quaint.

The Canadian Press reports on two incidents under investigation by the Ontario police watchdog.

One was depicted in news photos of a woman being trampled by a Toronto police horse temporarily deployed to the nation’s capital as part of efforts to end the illegal occupation.

The other involves the firing of a “less lethal” riot weapon by a Vancouver police officer, another of many law enforcement personnel from across Canada temporarily working in Ottawa. No one was hurt by the discharge, as far as authorities know so far.

In fact, the police response to everything that has happened in Ottawa since late January has seemed mostly gracious and exceptionally restrained – a far cry from some of the most robust and questionable responses I’ve seen in my career.

In the late 1990s and early 2000s, student protests in support of a number of causes happened regularly and my alma mater, Concordia University in Montreal, was one of the hotbeds of the action.

One of the most notable outbreaks of violence occurred in April 2001 when thousands of protesters from all walks of life gathered on the highway in Quebec City, where the Summit of the Americas was being held.

On the first night, some anarchist-type parasites used the protest as an excuse to wreak havoc. It worked.

Things were heated and rowdy but mostly peaceful until some idiot up front threw an object out the window of where a gala for dignitaries was to take place. This was enough for police to declare the protest an illegal assembly, triggering a full-scale riot response.

Armored cops didn’t just wield batons to look mean. They had a full workout. Rubber bullets were apparently fired at anything and anyone, probably in violation of protocols. The tear gas was deployed so generously that you would have thought the police were trying to advance an expiration date on their cache.

There were no targeted arrests of clearly identifiable rogue elements, no attempts to negotiate and certainly no fist bumps with protesters.

The global overreaction sparked even more violent acts – a vicious circle that would not be broken for days.

Some protesters were injured, but I don’t recall if any investigations into police conduct were launched.

This all happened barely three hours into the first night. I can’t imagine what the reaction of the police would have been if one of the demonstrators had decided that he was going to try to camp in the streets of Quebec for three days, let alone three weeks.

History doesn’t just show how relatively kind the police have been to Ottawa’s loud and disruptive occupiers.

It also shows that the agents probably didn’t need any special powers to do their jobs.

The federal government’s invocation of the Emergencies Act looks like a panic to restore order to Ottawa, preceded by a total failure of local law enforcement and a quiet response ( if not absent) from a provincial government only months away from fighting for re-election .

It’s as if everyone who had real power over the situation in Ottawa at the start wanted it to become the federal government’s problem, when it should never have come to that.

How disappointing it has been to see some police departments and multiple levels of government somehow find a way to send all the wrong messages throughout this crisis.

Sign up to receive daily news from Calgary SUN, a division of Postmedia Network Inc.

The next issue of Calgary Sun Headline News will soon be in your inbox.