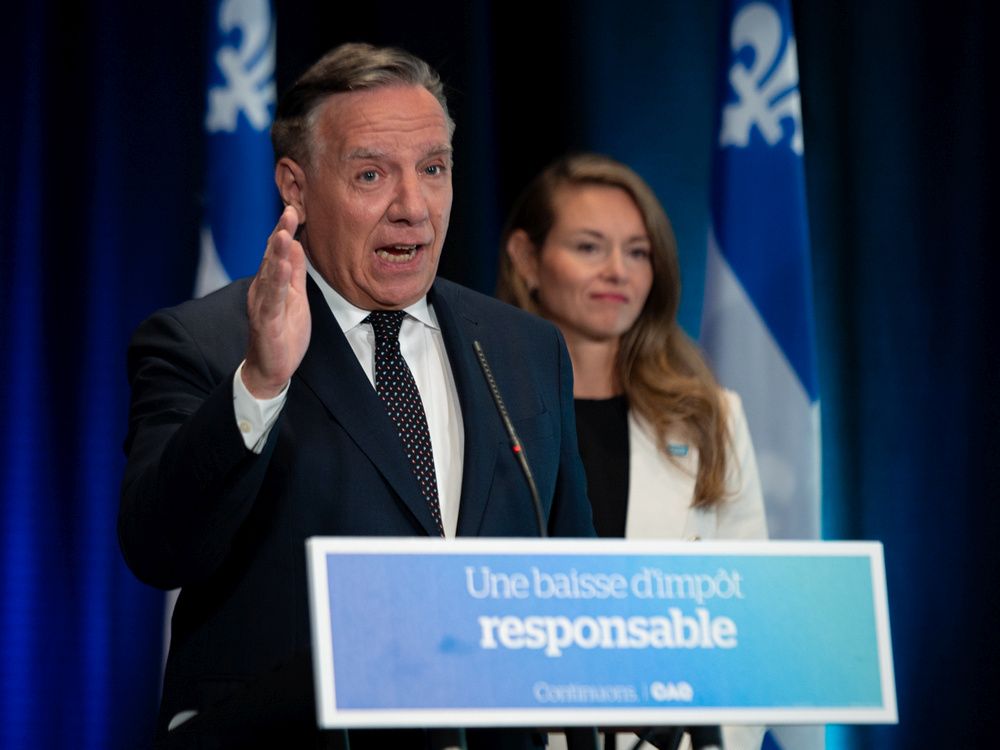 LÉVIS — After promising the biggest tax cut in Quebec history on Monday morning, Francois Legault announced another afternoon inflation relief if voters re-elect him Oct. 3: one-time checks of $400 $ or $600 will be issued in the fall.

Legault made the second announcement at the end of the day standing in a Levis grocery store filled with customers shopping for dinner. In total, 6.4 million Quebecers would benefit from the government sauce as the Coalition Avenir Québec continues to strengthen what it calls a citizen shield against inflation.

The amount would be determined based on a person’s 2021 income. Revenu Québec would send the checks automatically. To be eligible, you must be 18 years old and reside in Quebec on December 31, 2021. The cost of the measure has been estimated at $3.5 billion.

Legault insisted the ad was not a way to buy votes, but rather an aid to Quebecers. He noted that the average cost of groceries today is 8% higher than a year ago.

“I think the government has a duty to help Quebecers cope with this exceptional increase in costs,” Legault told reporters. “We have the means to do it.

He acknowledged that other parties wanted to target discounts on essentials or gas, but he said he preferred the check formula.

“We prefer to let Quebecers have the freedom to decide,” Legault said.

This is the second time that Legault has dangled checks to Quebecers. In the 2022-23 budget last March, his CAQ government handed out a check for $500 to taxpayers earning less than $100,000.

The new payment was part of an “anti-inflation shield” pledge announced on Monday, which also includes $7.4 billion in income tax relief. The CAQ promises a drop of one percentage point for the two lowest tax brackets starting in 2023.

After the first four-year term, the two lowest tax rates would continue to decline by 0.25% per year, for a total decrease of 2.5 percentage points by the 10th year.

“It will help Quebecers keep more money in their wallets,” Legault told reporters at a morning press conference kicking off the second day of his campaign. “It’s a first step in our inflation shield.”

“I am very proud of this commitment,” added Finance Minister Eric Girard. “This will be the largest tax reduction in the history of Quebec.

The cuts are expected to benefit 4.6 million taxpayers, he noted.

The money for the cut would come from the Generations Fund to fight Quebec’s debt. The CAQ proposes to reduce the annual payments to the fund by 39% to pay for the tax reduction.

Both Legault and Girard have argued that Quebec’s debt situation is better under control than it was when the CAQ came to power in 2018. Quebec’s debt-to-GDP ratio is improving and getting closer from that of Ontario. (In her independent pre-election report on Quebec’s finances, Auditor General Guylaine Leclerc noted that Quebec is swimming in money.)

Liberal leader Dominique Anglade called the CAQ’s plan to cut payments to the Generations Fund irresponsible, while announcing her own plan to cut the two lower tax rates by 1.5%.

A recent Léger poll showed that 75% of Quebecers have had to save money, reducing their spending to cope with inflation.