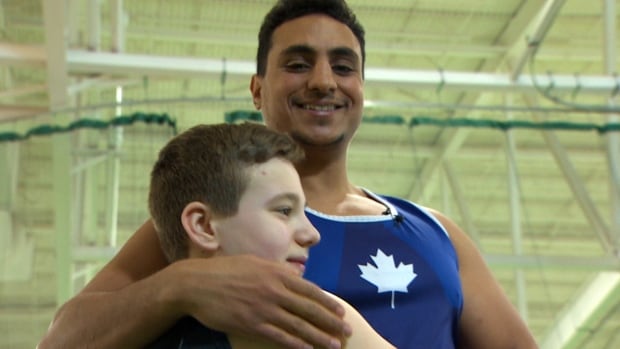 It’s an unlikely couple, the two of them.

One a 26-year-old Egyptian fighter, the other a little boy. They practice, practice with a balance ball and practice, while Ethan Shaw gives Hady Ghoneim a glimpse into his life.

“I feel so good, I feel like a new person,” said nine-year-old Ethan, blocking punches from his much bigger opponent.

“A new person? I’m so happy to hear that, it’s amazing,” Ghoneim replies.

It’s an unlikely friendship born out of Ethan’s desire to gain confidence and protect himself from bullies.

But his training and his newfound friendship are now in jeopardy as Ghoneim makes a last ditch effort to stay in Canada.

Ghoneim arrived in St. John’s on a sunny, warm May day in 2017 and was immediately struck by the rugged beauty of the place and the people who call it home.

“Honestly, even from the first day when I was so blessed, I met a lot of beautiful people,” Ghoneim said.

He attended Memorial University for a year and a half, but after he and his family in Egypt fell on difficult financial times, Ghoneim said he dropped out.

Later he went back to school, but it was too late.

By leaving school indefinitely — not counting scheduled school vacations — he broke a rule on his study permit that says you must stay in college.

Last February, the federal government refused his request to extend his study permit.

“I’m just living in limbo now, just waiting,” Ghoneim said. “I received several job offers which I had to refuse because I am not legally authorized to work.”

He has since hired Meghan Felt, a McInnes Cooper partner who specializes in immigration law.

“There are relatively limited options for him,” Felt said in a recent interview.

They chose to proceed with what is called an H and C request, or humanitarian and compassionate request.

“You have to make sure you comply. And if you don’t you get out of line, it makes you ineligible. So you have to be very careful,” she said.

The process will take about two-and-a-half years, she said, and the immigration system as a whole is known to be plagued with application backlogs, even before the Russian invasion of Ukraine. adds additional pressure on the system.

According to figures provided by Immigration, Refugees and Citizenship Canada, the refusal rate for humanitarian and compassionate applications has declined since 2020, when more than 60% of people who applied were refused.

“This only applies to people with exceptional cases, who have exhausted all other options,” a spokesperson wrote in an email.

“It is a last resort and provides the opportunity to consider compelling humanitarian circumstances on a case-by-case basis. A central part of this process is to ensure that each case is assessed on its merits and given a due process, including the right of appeal.”

Felt said she will argue that Ghoneim has been of significant benefit to the community and would be an asset to the province and the country in the future.

She hopes the federal government will recognize Ghoneim’s outstanding sporting achievements and what he could do for the country.

Ghoneim has represented Newfoundland and Labrador at four national kickboxing and muay thai competitions, winning five medals. In 2019, he was invited to join the Canadian World Kickboxing Association (WKA) team.

“I’ve always – ever since I got here – always been grateful and I try to give back and show my gratitude,” he said.

“I remember my first competition, my first national championships. I took my Egyptian flag and I also took my Newfoundland flag with me, and when I won, on the podium, I was up with both flags because that’s basically what I stand for now.”

Ghoneim is currently staying in the country on a visitor’s visa while his application is pending.

His life is in limbo as he navigates what he can do within the legal parameters of living in the country. This means that he cannot work, or even compete; he no longer qualifies for the MCP and could face a hefty bill if injured.

Ghoneim said he had trained and mentored hundreds of people during his time in Newfoundland and Labrador, but missed competing for the province.

“I just want to be able to do that again – to be able to go with my team and, you know, hopefully one day go to the Olympics or something. Why not?” said Ghoneim.

“I really believe in myself. I’m really talented and one of the best fighters out there, so I think I’ll be able to do it. But I just need some help.”

Ghoneim admits having made a mistake but pleads for leniency.

“We’re leaving our childhood friends and family and everyone behind to have a chance for better opportunities and a better life. And it’s very difficult, you know, some people’s rights here are rights. dreams at home.”

Last year, Suzanne Hearn met Ghoniem through a mutual friend and asked if he could mentor her son, Ethan, who had struggled socially and academically.

Hearn, who wrote a letter to Immigration, Refugees and Citizenship Canada in support of Ghoneim, said his son was never able to bond with anyone through extracurricular activities, until he meets Ghoneim.

“He’s happier, he’s more confident and loves what he does and he’s excited. We’re here three days a week in the gym with Hady and it’s like he’s become a whole new person with his confidence. , even his walk,” Hearn said.

She worries about what will happen if Ethan loses one of the only male role models he has and points out the important role Ghoneim plays in the community.

Later this month, Ethan will be 10 years old. Ghoneim will be there.

“He’s a really great guy, he makes me happy,” Ethan said, as the two friends broke off practice.

Ghoneim replied, “You make me happy too, buddy, I’m grateful to have met you.”

With galloping inflation, Quebec will limit school tax increases in 2022

Is the Rouge et Or du Québec the best triathlon club in the country?