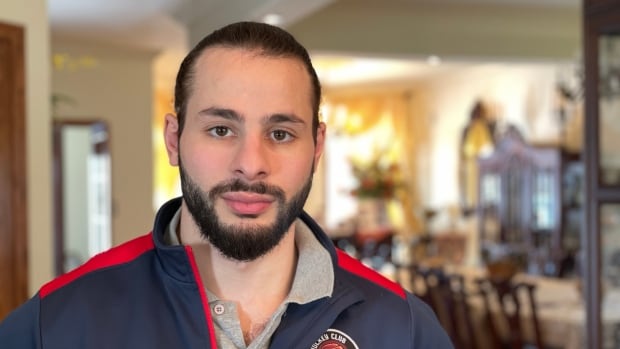 When Eliezer Sherbatov returned to Canada on Tuesday after the disaster in Ukraine, he hugged his wife, slept next to his two-year-old daughter and met his three-month-old son for the first time. Five days earlier, he had feared he would never see his family again.

Last Thursday, the Israeli-Canadian professional ice hockey player was with his team, HC Mariupol of the Ukrainian Hockey League, in a hotel in Druzhkivka for a game when he was awakened at 5 a.m. by the sound of a bomb exploding.

“Then you hear for a second and when things start to shake around you (…) you understand that war is within reach,” said the 30-year-old.

Russian forces this week stepped up their attacks on major urban areas, including the capital, Kyiv, and the strategic port cities of Odessa and Mariupol in the south, where Sherbatov’s team lives. Amid the fighting, the humanitarian situation deteriorated and international outcry against the invasion grew. More than a million people have fled Ukraine following the invasion, in the fastest refugee exodus this century, the United Nations said on Thursday, as Russian forces continued efforts to take control of key cities.

Long lines of cars and buses were blocked for days at border checkpoints in Poland, Hungary, Slovakia, Romania and non-EU Moldova. Others crossed borders on foot, carrying their belongings away from the war.

Sherbatov says he knew he had to leave the country and return home with his wife and children to Laval, Quebec. He just didn’t know how.

“There’s nowhere to go,” he said. “You are in the middle of nowhere in Donetsk oblast (province) where thousands of Russian servicemen are on the east side… and on the west side Ukrainian servicemen.”

Sherbatov says the first thing he did after calling his wife to reassure her was to seek help in Canada. He only received an automatic response from Global Affairs Canada telling him to go to the nearest air raid shelter.

“If I had listened to a cut-and-paste email from the government…I would still be here with my teammates under an air-raid shelter waiting to die,” he said.

Also of Israeli nationality, he contacted his embassy which told him to “do everything, no questions asked, to get to Lviv”, in western Ukraine, about 70 kilometers from the border with Poland .

Securing the very last ticket that day, Sherbatov waited with two teammates for the train from Druzhkivka to Liev. Before he arrived, however, he was informed by an army communications officer in Mariupol that the trains were being targeted.

When he arrived, one of his teammates chose not to board out of fear. But Sherbatov said he trusted God following a call with his father and boarded the train – beginning “the most difficult and stressful 24 hours”. [I] never lived.”

The train, which Sherbatov dubbed “the train of death”, passed through Kramatorsk and Kharkiv and then Kiev, all of which are under heavy attack from the Russian military. Sherbatov says he didn’t sleep a wink the whole trip.

“You’re afraid you won’t wake up,” he said. “It was very difficult, you can’t explain it if you don’t live it… It was difficult just to breathe.”

“A jungle” on the Polish border

Sherbatov was grateful to have survived the ride, but then faced the hurdle of crossing the border into Poland. After arriving in Lviv, he was helped by a team of Israeli volunteers who he said loaded him with a bus of 17 people, mostly children and the elderly, who were also leaving for Poland.

Traffic at the border was “a complete jungle”, according to Sherbatov, describing thousands of people waiting to cross and vehicles stretching for 20 to 30 kilometers. The group eventually had to cross on foot. After “hours and hours”, in the cold, they traveled to Poland, hugging and crying. They were then transported to Warsaw to the Israeli Embassy.

WATCH | A hockey player woke up to the sound of a bomb exploding:

On February 24, Eliezer Sherbatov woke up to the sound of a bomb exploding outside the hotel where he was staying with his hockey team in Druzhkivka, Ukraine. He says if he had followed the Canadian government’s instructions in an email, he would still be in a bomb shelter, “waiting to die”. 1:16

Sherbatov praised the Israeli volunteers, calling them “beautiful people” and applauded the embassy’s structure in times of crisis. He says that is what Canada should offer.

He also denounced the Canadian government for always applying the proof of a negative and expensive PCR test when he tried to return to Montreal without having one. “I tried to explain that I had just come back from a war,” he said, noting that he had left everything behind except his passport.

Eventually, someone on the bus in Poland paid for his test.

Fears for teammates left behind

Although all of his personal belongings remained in Mariupol, Sherbatov says all that matters is that he is back in St. Dorothea with his family.

“I met my baby boy and it’s something special – I cried like a baby,” he said. “It’s a surreal and special moment.”

His wife, Somaly Sherbatov, says waiting for news of her husband’s dangerous travels was a “nightmare”, and she is grateful to have him home.

“If it hadn’t been for the help of his friends, the Israelis who were with him and his father, I was going to be a single mother of two here,” she said.

As Sherbatov acknowledges how lucky he is to have escaped Ukraine, he worries for the thousands of others who remain stranded in the country as the war rages on, including the teammates he has left behind. He says he keeps in touch with them and prays.

“I try to be happy but it’s very difficult to know that they are still there,” Sherbatov said in tears.