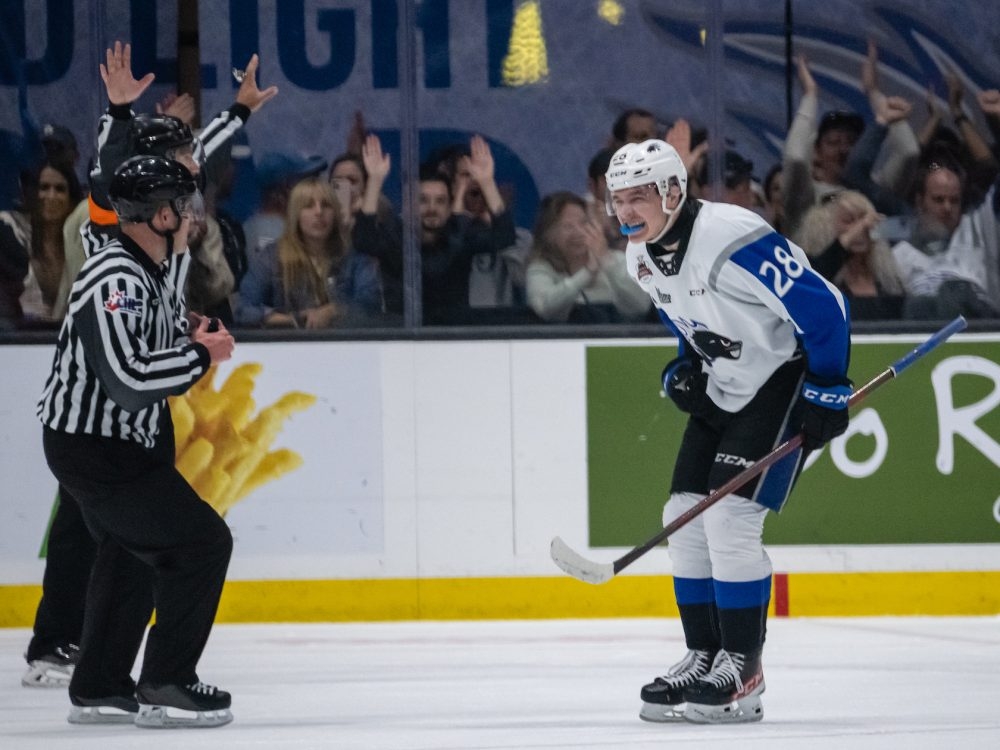 The Quebec product scored four goals for the host Saint John Sea Dogs in a 5-3 win over the Shawinigan Cataractes at Harbor Station Arena on Saturday.

Dufour, 20, had a natural hat trick in the second period to erase a three-goal deficit, and added a fourth in the third to send the Sea Dogs straight to the final on Wednesday. Jérémie Poirier scored the Sea Dogs’ other goal, while goaltender Nikolas Hurtubise made 26 saves.

“After the first period we talked in the locker room and we had to kill a penalty to start the second and we went from there,” said Dufour, who had 15 shots on goal. “I missed a breakaway and I thought I couldn’t miss more chances like that.

“I managed to score a goal right after that and then another shortly after a face-off and it was just amazing to draw the crowd.”

With the loss, the Cataractes will face the OHL champions, the Hamilton Bulldogs, in the semifinals on Monday. The Bulldogs finished third in the four-team standings with a win over the Edmonton Oil Kings on Friday. The Oil Kings, WHL champions, were eliminated.

“It was a dynamic game,” said Cataractes head coach Daniel Renaud. “We played a great first period, generated a lot of scoring chances, managed the puck well. But we took too many penalties in the second period. We took six penalties for what we saw tonight.

Loris Rafanomezantsoa, ​​Olivier Nadeau and William Veillette scored for the Cataractes, who took a 3-0 lead in the first period and appeared to have the competition under control.

Rafanomezantsoa opened the scoring after just 49 seconds on the Cataractes’ first shot. He moved a shot from the blue line that passed Hurtubise.

Nadeau deflected a shot from defender Zachary Massicotte 14 minutes into the game to make it 2-0, moments after Mavrik Bourque was robbed by Hurtubise.

Nadeau threw a back pass to Bourque in front of the net, but Hurtubise managed to slide in to make an exceptional save.

While the fans were still cheering for the save, the puck came back to Massicotte on the blue line and his shot was deflected by Hurtubise by Nadeau.

The Cataractes took a 3-0 lead with 43 seconds left in the period as Veillette recovered the remains on a run from Xavier Bourgault and fired a backhand shot past Hurtubise.

“We had a pretty good first period, but in the second period we took too many penalties,” said Bourgault. “They have a very good power play and they showed it tonight. We have to stay outside the box against this team.

In the second period, Dufour took over and single-handedly brought the Sea Dogs back. He scored two minutes into the period by blowing a one-timer past Coulombe from the left face-off circle on a pass from William Villeneuve.

Dufour scored against 21 seconds later, recovering the puck in the same face-off circle and catching a shot over Coulombe’s glove.

The New York Islanders prospect completed the hat trick just over six minutes later, smashing the net with his own backhand shot and stuffing the rebound past Coulombe.

The three goals in 6:36 was the second fastest at the Memorial Cup in more than 20 years. Only Dale Mitchell of the Windsor Spitfires in 2009 scored three goals faster, scoring a hat trick in 3:33.

Saint John took the lead 14 minutes into the second, as Poirier fired a shot from the point and passed Coulombe.

“I always say we all have special women in our lives; our grandmothers, our mothers and our wives, I have a daughter, I have sisters, but the key to success tonight is the lady who is called Lady Mo,” said coach- leader of the Sea Dogs, Gardiner MacDougall. “Miss Lady Momentum, sometimes she is hard to find, you never know how long she will stay with you and we were lucky to have found her tonight.

“She stuck with us for a while and all the credit goes to the crowd for introducing Mo to our team and we found a way to use her to get a positive result.”

The Sea Dogs extended their lead two minutes into the third period as Dufour scored his fourth goal of the game, rushing in a shot from the high slot and blasting it past Coulombe on the power play.

“Big players show up in big moments, and Douf was very important to us tonight,” Sea Dogs center Josh Lawrence said. “One that he had that first one, we knew he was going to keep going, which was really good.”

The Sea Dogs were eliminated in the first round of the QMJHL playoffs and suffered a 38-day layoff before opening the tournament with a win over the Bulldogs on Monday.

MacDougall won seven national championships in 22 seasons with UNB and will return to the program after the Memorial Cup.

“We’re hanging out,” Gardiner said. “Maybe a month ago, some people thought we shouldn’t be here, and others said we weren’t going to last long.

“But the group has become something really special for the city and for the league, and we hang around and it was important for us to have a great emotional game like this.”

From our newsroom to your noon inbox, the latest headlines, stories, opinions and photos from The Toronto Sun.

The next issue of Your Midday Sun will soon be in your inbox.