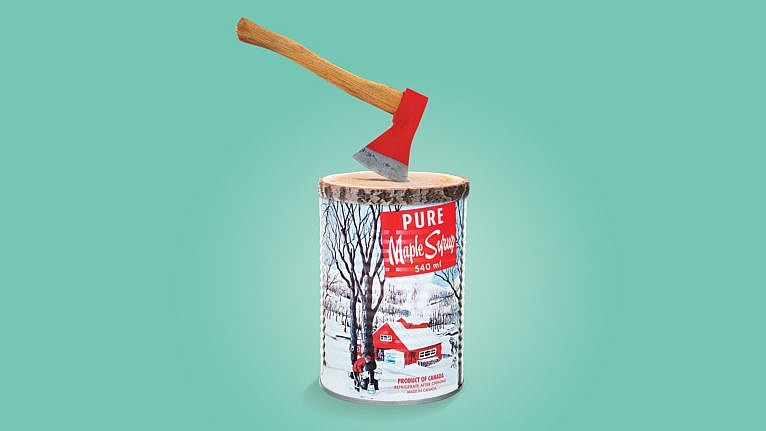 Inside the fight to save New Brunswick’s maple syrup

Every winter, Nicolas Martin and his father, Marco, snowshoe into a public forest near the Restigouche River, about 300 km north of Fredericton, where the snowdrifts are as high as they are. They stop at each mature sugar maple to drill holes, some 30,000 in all, into which they drive nozzles called stakes. These connect to tubes that carry sap to the boiling room when spring arrives, and the team turns on its evaporator to boil sap for maple syrup.

In January, a group of maple syrup producers, including the Martins, marched in Saint-Quentin, New Brunswick’s heart of syrup country, asking their government to rent them more sugar bushes. A syrup producer, Denis Côté, told a newspaper: “They cut everything blank. Meanwhile, in Quebec last summer, syrup makers created a video criticizing loggers and demanding that governments protect Crown land for that sweet spring nectar.

MORE: The most Irish island in the world is in Canada

Sawmills and pulp mills have long been mainstays of New Brunswick’s economy, but the northeast of the province, where the Martins live, is increasingly known these days for syrup of maple. As demand for syrup soars, syrup producers in New Brunswick and Quebec are calling on governments to reduce logging and protect more maple trees. “We want to have access to more public land so that we can develop our industry,” says Marco.

The world has a sweet tooth for maple syrup: about 80% of the world’s syrup comes from Canada, mainly Quebec, and exports increased by 21% last year. Last fall, to meet global demand, Quebec released about half of its Global Strategic Maple Syrup Reserve, or 22.7 million kg. Syrup makers want to produce more but say loggers are threatening their livelihoods. You need maple trees to make maple syrup, but the wood from maple trees has many other uses: floors, furniture, pool cues, pellets for heating, shipping pallets, paper, moldings in houses and even boards. wheels, guitars and pianos. Sawmills in Eastern Canada will not easily give up their supply of mature maples. This leaves governments in a sticky situation: do we cut the maple trees for the wood or do we let them grow for the syrup?

Both groups are demanding more access to sugar bushes. Quebec has leased 40,000 hectares of public forests for maple syrup, which represents about one-fifth of the province’s production. Meanwhile, about 80 sawmills in Quebec consume about 1.2 million cubic meters of maple wood each year, and they want more. The price of maple planks has increased by 39% between 2020 and 2021, as the booming American housing market has increased American demand for maple from Quebec.

So far, Quebec has been able to meet the demand for maple syrup through existing private forests and Crown logging concessions. But the province’s syrup makers say it will need 168 million taps by 2080, about four times its current number. They want permission to lease about 200,000 hectares of public land over the next 60 years. However, Jean-François Samray, general manager of the Quebec forest industry lobby, says the factories need these maples. “We are working to find solutions. We don’t see why people have to choose between eating syrup on their pancakes or eating pancakes while sitting at a maple table. We believe there is room for both. Michel Ferron runs Scierie Carrière, a sawmill in Lachute, north of Montreal, and one of about 80 sawmills in Quebec that buys maple logs. The mill, which has 40 workers, wants to protect its wood supply; the factory ships maple to Japan and Indonesia to make components for Kawai pianos. “We know everyone loves maple syrup, but setting aside more public land for maple syrup production will reduce our volumes,” Ferron says.

In Quebec, producers have accused the province of cutting sugar bushes to make a quick buck; a healthy maple tree will produce $30 of syrup per year for a century. Serge Beaulieu, head of the producers’ group, lives south of Montreal. “Behind my sugar shack, the forest has been logged for 200 years,” he says. “We need to save space for maple syrup. But Beaulieu also needs sawmills; he thins out his sugar bush and sends the wood to the mills. “We don’t want the factories to disappear,” he says. “We have to find a balance.”

Christian Messier, a forestry researcher at the University of Quebec in Outaouais who makes maple syrup for his family and friends at his own sugar bush in Saint-Émile-de-Suffolk, Quebec, says renting more forest to syrup producers could create another problem in addition to a shortage of wood. Syrup makers are cutting down other tree species to favor maple trees: “You end up with a monoculture of maple trees which will be bad for resilience and biodiversity,” he says. Logging operations, on the other hand, let in sunlight, which promotes the prosperity of other species such as oak, walnut and yellow birch.

RELATED: Jet Fuel Is Bad For The Environment. Trails are even worse.

The Quebec government says it has heard the concerns of syrup manufacturers and has set up a round table with syrup producers, mills and the government to find a compromise. The province also notes in an email that it is bullish on maple as a source of wood; American builders want more maple from Quebec.

New Brunswick, where the Martins are bleeding their trees, is a relative newcomer to the syrup industry. Syrup producers in Quebec and the United States suffered a poor syrup season in 2021, compared to the abundant harvest harvested in New Brunswick. Jean-François Laplante, who bought three sugar bush operations on Crown land in 2008 and has since doubled his production, sold all of his 2021 syrup to buyers in Quebec (who resell most of it in the United States ). “No one in New Brunswick has syrup on their shelves yet that they can’t sell,” says Laplante, who heads the New Brunswick Maple Syrup Association. New Brunswick’s syrup producers also want more trees, and they’ve asked their government to roughly double the forest available for maple syrup, or about 2% of the province’s public forests. The New Brunswick Department of Natural Resources says it is evaluating their request against other land use options.

Maple sap flows better after a cold winter. As the climate changes, it might be a good idea to protect the sugar bush in northern New Brunswick, where the syrup season arrives a month later than in southern Quebec, in particular to help young syrup makers do their job. . “I love being in nature,” says Nicolas Martin. “It’s calm and quiet. People call it meditation.

This article appears in print in the April 2022 issue of Maclean’s magazine with the title “Sugar rush”. Subscribe to the monthly print magazine here.

Do you want more ?

Get the best of Maclean’s sent straight to your inbox. Sign up for daily stories and analysis.