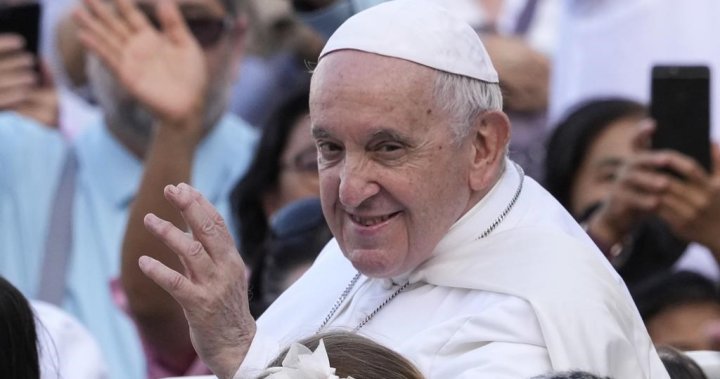 Preparations are well underway in Quebec for the visit of Pope Francis in a week.

The stop will be part of his trip to Canada and he is expected to apologize to Indigenous people for the atrocities committed in Catholic boarding schools.

“The visit is important because for survivors, for people who have been through the school system, it will probably be a way for them to help with their own reconciliation,” explained Chadwick Cowie, assistant professor in the department of political science. of the University. University of Toronto.

But many fear that some of those survivors, who are now elders, will be left behind.

There will be two gatherings in the province. The first is Wednesday on the Plains of Abraham, which is open to the public – tens of thousands are expected.

The main event in Quebec is a mass next Thursday at the basilica of Ste-Anne-de-Beaupré, northeast of Quebec, where the pope is expected to apologize.

“Mass is at 10 a.m., so the logistics are very tricky because you have to be in a certain area at 6 a.m.,” said Arnold Boyer, council leader at the Mohawk community of the South Shore of Montreal. . told Global News.

He does not know if any survivors of the Kahnawá:ke residential schools will be able to attend mass.

He says a group of parishioners are expected to leave from St. Francis Xavier Mission Catholic Church in the community, but the elderly might not be among them.

“If they were to leave here and go with the church, they would have to leave here a 2.5 hour drive to Longueuil and take a bus at 3 a.m.,” he said, adding that it is too much for seniors like his. parents in their 80s surviving from residential schools.

1:40
Last-minute scramble to prepare for Pope Francis’ visit to Alberta

Last-minute scramble to prepare for Pope Francis’ visit to Alberta

Others wonder why only 70% of the 1,600 seats inside the basilica are reserved for the indigenous population, up from just 400 weeks earlier after an outcry from indigenous groups.

“We pushed very hard with the organizers to give priority to survivors,” said Ghislain Picard, Chief of the Assembly of First Nations Quebec-Labrador.

Despite the restrictions, Picard remains hopeful.

“We were told, and it reassured us, that no one will be turned away,” he said.

A few days before the papal visit, the indigenous communities are waiting to see what the pope’s message will be.