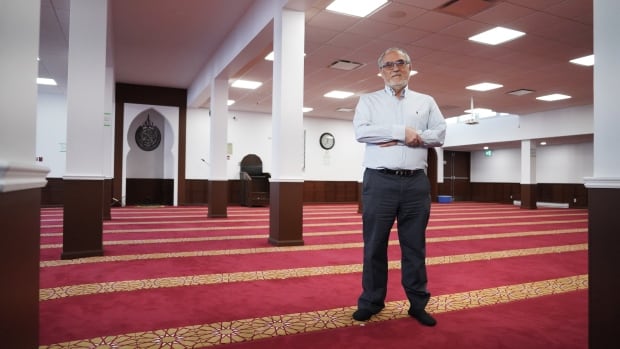 When visitors approach the Islamic Cultural Center in Quebec’s Sainte-Foy district, they are no longer greeted by the large bay windows that once looked out onto the street before a deadly shooting five years ago.

It was replaced with a concrete wall with smaller windows, in case someone tried to ram the building with a truck.

Security cameras face all entrances, including the one a gunman used on January 29, 2017, when he entered and opened fire in a prayer hall, killing six worshipers and injuring 19.

Mohamed Khabar had stopped by the mosque that night, as he often did after closing his barber shop. After the prayer, he talked about football with friends: Morocco’s defeat against Egypt in the African Cup of Nations.

“We were talking… about the mistakes made by the referee and the coaches,” Khabar said. “We were discussing this when we heard a loud noise.”

Khabar says he froze when he saw the gunman shooting men and children around him. He received two bullets, in the leg and in the foot.

As he lay there bleeding, he said he thought, that’s it. He couldn’t get away if the shooter got close.

Khabar managed to climb the stairs with a few others and hopped on his good leg down to the basement, to hide in the electrical room. Still, he feared the shooter would follow his blood trail.

But the shooter did not return.

“After the tragedy, some people were very afraid to come to the mosque,” said Mohamed Labidi, the mosque’s former president.

The former president of the Islamic Cultural Center gives a tour of the recently renovated mosque which was the scene of a deadly attack five years ago. 2:51

Even before the shooting, the community had planned to step up security at the building, he says, as they were alarmed by escalating acts of vandalism and hate, such as graffiti and a pig’s head left on the steps of the building. the mosque.

Renovations and security upgrades were completed in March 2021.

At least two volunteers are now monitoring security cameras at all times, to monitor worshipers as they pray.

Khabar thinks the building is safer.

There were also cosmetic changes, but significant ones.

Sections of the old green carpet that were stained with blood had already been removed after the shooting, but have now been fully replaced. The new carpet is red.

After the shooting, the mosque’s leaders had left bullet holes in the walls – scars on the building that mirrored the scars left on the community itself.

These scarred walls have since been plastered over and repainted in crisp white. Brightness is intentional.

The idea is “to turn the page and have a sign of peace when entering the mosque”, explains Labidi.

“Our goal is to forget the tragedy, and what happened here back then.”

But in the world outside the mosque’s walls – despite messages of solidarity and sympathy – both men say it can be hard to forget that their community was, and still is, the target of hatred and of discrimination.

Khabar says his life isn’t like it used to be – as well as running his hair salon, he also meets politicians, advocates for gun control and speaks out against Islamophobia.

“You feel like you’re being targeted by laws…that don’t help you forget what happened at the mosque,” Khabar said.

Labidi points to Quebec’s secularism law, known as Bill 21, which prohibits the wearing of religious symbols, including the hijab, for public employees in “positions of authority,” including teachers.

“We are all affected by this law because … there is discrimination in this law, and it should not be allowed in this society,” he said.

Since the bill was passed, Labidi says at least a dozen families have left Quebec. He says even for those whose jobs have not been directly affected, the law has eroded their sense of belonging.

This sentiment is supported by research published last year in the journal Canadian Ethnic Studies, by researchers Geneviève Mercier-Dalphond and Denise Helly, which found that the shootings, the rise of far-right groups and laws like the Bill 21 have all had an impact on the well-being of Muslims in Canada.

However, the study found that respondents in Montreal and Quebec City were “most concerned about institutionalized Islamophobia in the form of laws, namely Bill 21.”

The study found that respondents in Quebec were “disappointed” that the shooting was not the turning point they had hoped for.

Quebec Premier Francois Legault has repeatedly defended the bill, saying it is neither aimed at Muslims nor motivated by racism.

He said recently that he would attend the ceremony marking the anniversary of the shooting on Saturday.

“A message of hope”

Despite the disillusionment he sees among Muslim Quebecers, Labidi says he still feels the support of the wider community.

“There are a lot of people whose opinions have changed” after the shooting, he said. “Everyone in the community still sees it, five years later.”

He wants this year’s commemoration to be “a message of hope” that Quebecers can be stronger together and that the Muslim community is “part of this society.”

Although he still hurts when he stands too long and replays the shooting in his head, Khabar also has hope.

He hopes his son, who is now five, will grow up feeling safe.

“I’m an eternal optimist,” he said, “I think things will change.”

Anglade: Liberals would scrap tunnel project and instead spend on health and education