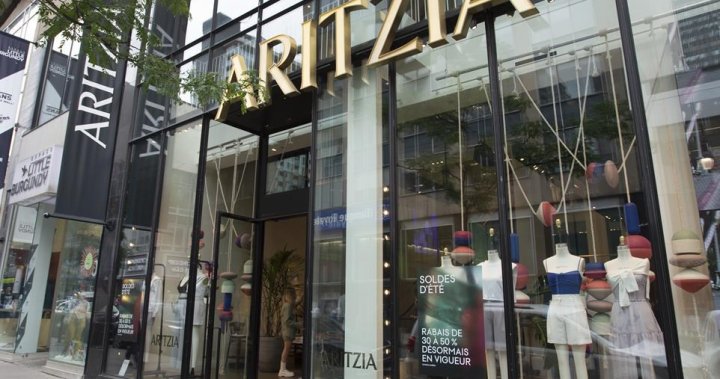 How Aritzia maintains momentum in a complex retail landscape

As Canadian retail darling Aritzia prepares to release its latest quarterly results on Wednesday, it continues to stand out as a leader and pioneer in a complex, roller-coaster retail environment.

The Vancouver-born fashion company, founded by Brian Hill in 1984 and now run by longtime employee Jennifer Wong, has developed something of a cult following, particularly over the past decade, by successfully tapping into the media social, the generation of influencers.

And retail experts expect the momentum to continue.

In a recent note to clients, RBC Capital Markets analyst Irene Nattel said Aritzia “enjoys an exceptional lead as it continues to seed the U.S. market, grow its online presence and expand the assortment into new categories, all supported by strong manufacturing and supply chain capabilities.”

Even celebrities like Jennifer Lopez, Kendall Jenner, Hailey Bieber, and Meghan Markle have been spotted wearing Aritzia clothes over the past few years.

And after a pair of vegan leather pants went viral on TikTok in 2020, the company has further solidified itself as one of the trendiest brands today, especially among Gen Z.

During the first two years of the COVID-19 pandemic, when businesses were forced to shut down and global supply chains were blocked, e-commerce helped improve business performance and, when shops reopened, sales quickly surpassed pre-pandemic levels.

Retail watcher Liza Amlani credits Aritzia’s success primarily to product assortment, which has helped it become a go-to place for workwear, going out and casualwear. . The Retail Strategy Group founder said the company’s use of consumer insights to inform both the items it stocks and its customer service strategy has also given it an edge.

As a result, Aritzia was able to carve out a unique niche in the retail market between luxury fashion and fast fashion, largely catering to middle-class and upper-middle-class consumers.

“He has that element of aspiration. Even though it’s not considered luxury, I would say it’s still an aspiration for many, many people,” Amlani said.

“If you look at the competitors in the market, especially for Gen Z, there aren’t many players. I don’t see inflation as a barrier for Aritzia to consumer demand and spending, as they don’t have much competition.

Much of the company’s recent growth has been fueled by its continued expansion south of the border.

The company is also expanding some of its existing stores, such as its location at Yorkdale Mall in Toronto. He adds more space and his A-OK cafe as he seeks to improve the in-store shopping experience.

“It’s an attempt to sell the brand, not just sell the products. Being a priority drives online and offline sales after curating that desirable lifestyle,” said Jenna Jacobson, assistant professor at the Ted Rogers School of Retail Management at Metropolitan University of Toronto.

She believes Aritzia has established itself as a brand people can relate to, in part through its digital and influencer strategy, which has significantly increased its reach in the United States.

“When you see an influencer you follow post content tagging Aritzia or maybe create an Aritzia ‘haul’ video where people show off the best trends, I think that has a huge impact on understanding and acceptance of it. a brand by people and what they think is cool and trendy,” Jacobson said.

Before the pandemic, Jacobson took her students to the company’s headquarters, which she said they identified as one of the top Canadian retailers they wanted to learn about the most.

3:51
Major retailers are offering refunds while asking customers to keep the merchandise

“I’ve been amazed at the thought and detail that goes into the business, and the work to connect with customers at all levels. I think that’s one of the challenges the retail has been faced,” she explained.

Despite all the success, the company encountered a few road hurdles along the way.

When Aritzia made its public market debut in 2016, the shares began to trade quite well as investors saw strong growth potential during a tough time for the womenswear market in general. But the stock slumped a few months later as investor optimism waned even as the company saw sales growth.

The stock has seen its ups and downs since then, seeing a substantial rise in 2021. It has risen more than 250% in the past five years.

Heading into Wednesday, Stifel analyst Martin Landry said in a note to clients that he doesn’t expect to see a slowdown in demand, given Aritzia’s target market.

“Our discussions with industry participants suggest that Aritzia had a solid summer with mostly sold out summer collections,” he wrote.

Landry added that close attention will likely be paid to Aritzia’s inventory levels, especially with companies such as Nike recently reporting overstocked inventory, which often means deep discounts are needed to sell everything.

“We are not as concerned about Aritzia’s inventory situation, as the majority of the company’s products are ‘proven sellers’, which tend to have less fashion risk and therefore less prone to deep discounts and closing sales,” he wrote.

Pay by credit card? Most businesses in Canada may soon add surcharges for this

However, Canaccord Genuity analyst Derek Dley said in a note to clients that he expects second-quarter margins to come under pressure from continued inflationary pressures and the cost of ramping up shipments.

In the company’s first quarter, net profit soared 86% to $33 million on a surge in revenue.

As for Wong, who took charge of the team in May, Amlani said the choice made sense.

“It’s a great story for the brand. And who knows the brand better than someone who started in the workshop,” she said.