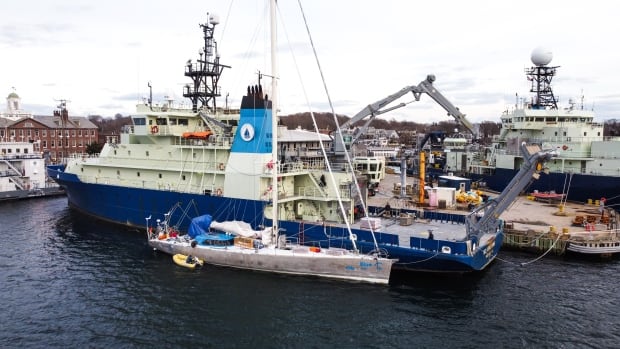 Canada is joining an unusual mission to measure climate change in the Atlantic Ocean — using a 24-meter sailboat to deploy robotic sensors.

The French sailboat Iris is currently in the South Atlantic in the middle of a three-month voyage that will release 100 autonomous sensors, including ten from Canada, to measure ocean conditions.

“As with most things during COVID, our offshore operations have been disrupted. This initiative came to fruition by looking at other opportunities to deploy these floats,” says Greenan, who is based at the Bedford Institute of Oceanography in Halifax.

“It’s also using a low-carbon approach to deploying these instruments in the water where we normally use large research vessels.”

The sensors gradually descend two kilometers below surface level and return to the summit, taking temperature and salinity measurements along the way. Every ten days, the float breaks the surface to upload data to a satellite. The information is used by meteorologists and scientists who can map ocean warming in real time.

The research is part of the Argo program, a network of 3,800 floating sensors around the world.

“It really revolutionized our knowledge of the ocean because before that we were dependent on research vessels going out and sampling the ocean and that was only done for a limited part of the year,” says Greenan, who is the Canadian manager of the Argo Program.

“We are able to monitor the evolution of the ocean in real time; we are actually seeing that … the ocean is warming over time.”

A private company, Blue Observer, owns the yacht. Canada, the United States and the European Union supply the floats, which cost around $25,000 each.

The first leg of the mission began in Brest, France, in November and saw 17 floats dropped in the mid-Atlantic for the European Union.

Last month, Iris docked at the Woods Hole Oceanographic Institution in Massachusetts to resupply and pick up more floats, including those sent by the Department of Fisheries and Oceans (DFO) to Nova Scotia.

Around 1,000 Argo profiling floats are to be dropped each year to support the Global Ocean Observing System, a program of the Intergovernmental Oceanographic Commission and part of UNESCO.

And the yacht can go to places that are difficult for research vessels to visit.

Iris has crossed the equator since leaving Massachusetts and is heading for St. Helena Island, 1,950 kilometers west of the nearest landfall in southern Africa. It is the remote island where Napoleon Bonaparte was exiled.

Then, Iris will head to Namibia.

Floats deployed in 2022 to have more sensors

The use of the sailboat is also with a daily rate that is a fraction of the $50,000 per day it can cost for research vessel time.

DFO has deployed 600 Argo floats off Canada over the past 20 years — on the West Coast, in the Labrador Sea and off the Scotian Shelf south of Nova Scotia.

Each year, between 20 and 40 are deployed to replace sensors that are retired.

This year, floats deployed in the Labrador Sea or on the Scotian Shelf will carry more advanced sensors that also measure biological and chemical conditions: for example pH levels, which can indicate acidification as the ocean absorbs more of carbon dioxide.

Greenan says there’s no substitute for searching at sea, but floats are good business.

They provide data every 10 days for about five years – around 200 ocean profiles – at a cost of around $125 per ocean profile from the standard sensor.

“It can’t completely replace the data we can collect from a ship, but it’s certainly an exceptionally cost-effective way to acquire data,” says Greenan.

A legacy of the 2018 G7 Summit hosted by Canada

For Canada, the Iris mission is a legacy of the 2018 G7 summit hosted by Prime Minister Justin Trudeau in Quebec City.

The summit is best known for the early departure of Donald Trump and the insults directed at Trudeau.

But at the meeting, Canada pledged to advance international cooperation in the oceans.

And one of the initiatives was to strengthen partnerships in the Argo program.

Icebreaker talks between Ottawa and Quebec shipyard shrouded in fog