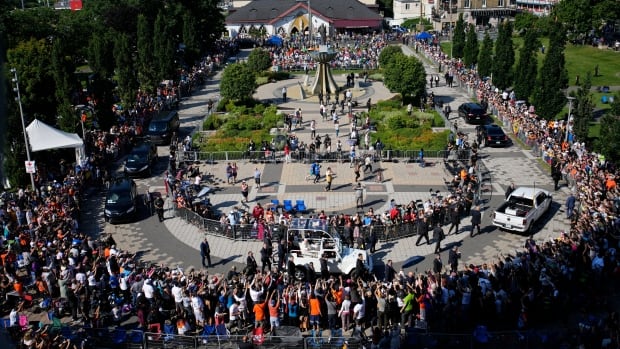 Hope and disappointment linger in Quebec as Pope’s visit ends

Germaine McKenzie was filled with hope as she traveled the eight hours from her Innu First Nation on Quebec’s North Shore to attend Mass delivered by Pope Francis on Thursday morning at the Ste-Anne-de-Beaupré Basilica, near Quebec.

Ultimately, the experience was disappointing for McKenzie, who survived nine years in boarding school as a child. But she says it reaffirmed something she has practiced for years: relying on community and Indigenous spirituality for healing, rather than colonialist institutions.

While the papal visit was a milestone for many survivors gathered at Ste-Anne-de-Beaupré, for some like McKenzie it was less about the pope and more about assembly power.

“I thought I would be moved, emotionally. I thought with everything that we survivors have been through, ultimately the Pope’s visit would be significant, that it would be historic – but we haven’t heard a word about residential schools,” said the McKenzie Basilica, outside.

In his sermon, Pope Francis said Catholics should “take a fresh look at many events in our own history.”

“Brothers and sisters, these are our own questions, and these are the burning questions that this pilgrim Church in Canada is asking, with deep sadness, in its difficult and demanding journey of healing and reconciliation,” he said in Spanish.

Later in the evening, the pope, for the first time in his visit to Canada, acknowledged the sexual abuse inflicted on “minors and vulnerable persons”.

McKenzie, who is a social worker in Uashat Mak Mani-utenam where she is from, felt the pope wanted to override the apology he made to Lac Ste. Anne, Alta., and repeated Wednesday in Quebec.

“I’m not ready, though. I still have dreams that I’m in boarding school,” she said.

McKenzie predicts that the survivors “will stay between us. We heal together, with Indigenous spirituality. That’s what I prefer. We talk about our hurts, what we’ve been through and where we’re going.

“Many of us had seen this as an incredible opportunity for the pope … to apologize on behalf of the institution, the Roman Catholic Church,” Saganash told the CBC Quebec show. Break away Thursday evening.

WATCH | Survivor Perspectives on the Papal Visit to Quebec:

Strong emotions at the Pope’s mass in Quebec

Outside, during Pope Francis’ mass in Quebec City, leaders, survivors and members of the Indigenous community talk about their conflicted emotions during the service.

Another shortcoming, according to Indigenous leaders, is that the pope did not address the Doctrine of Discovery, the centuries-old edict that paved the way for much of the New World settlement. For decades there have been calls to rescind the papal bulls that make up the doctrine.

This shortcoming was projected, quite literally, onto the faces of clergy and dignitaries on Thursday, when documentary filmmaker Sarain Fox and her cousin Chelsea Brunelle unfurled a large white banner from the basilica pulpit that read “Cancel Doctrine “, while Francis was seated.

“I never want to be seen as disrespectful to our survivors, but it’s to move the conversation forward and sometimes young people have to stand up and be troublemakers,” Fox told CBC afterwards.

Einish is from the Naskapi Nation of Kawawachikamach near the Quebec border with Newfoundland and Labrador, 950 kilometers north of Quebec. Being among other survivors was what mattered most to him.

“To be comfortable with other survivors and supporters is just something everyone needs sometimes, even myself. The support is there,” he said. “Because I think everyone needs to understand that we, the indigenous people, have been through a lot.”

The systems that created boarding schools, day schools and the Sixties Scoop — and the resulting trauma — are still in play today, Einish said.

Echoing McKenzie, Einish said the way forward is to reaffirm Indigenous self-government. He recently suggested to a leader in his community that the Naskapi Nation create its own board of directors for youth protection.

“We were taken away from our parents, from our family. Well, we still have this child welfare system, which keeps taking our children, our grandchildren to foster homes and place them in a different environment from the one they were raised in,” he said.

According to 2016 Census data, 52.2% of foster children in Canada are Indigenous, but only represent 7.7% of the child population.

“Starting something, making choices for ourselves and good service; so that our young people are not taken away from our community,” is what Einish would like to see.

Raquel Bacon, who is from the same community as Einish, said the papal apology and the sermon brought her comfort, while stirring up a range of emotions about her mother’s experience at boarding school.

“I just can’t imagine her being taken away. I think she’s been gone for two years, about five years. And it hurts,” Bacon said, adding that she wondered what the people taking her mother had told her grandmother at the time.

McKenzie, who traveled to Quebec alone to attend Mass during her summer vacation, says she was looking forward to continuing her healing journey on her own terms.

“We are no longer submissive. We are moving forward,” she said. “No more, ‘Do this, do that.'”

Friday, McKenzie will leave Quebec and continue his vacation with a visit to his son in Gatineau.

Pope Francis must leave Quebec on Friday at 12:45 p.m. for Iqaluit. The morning before his departure, he will meet first with members of the Society of Jesus, followed by a delegation of Aboriginals from Eastern Canada.

A National Indian Residential Schools Crisis Line has been established to provide support to former students and those affected. People can access emotional and crisis referral services by calling the 24-hour national crisis hotline: 1-866-925-4419.