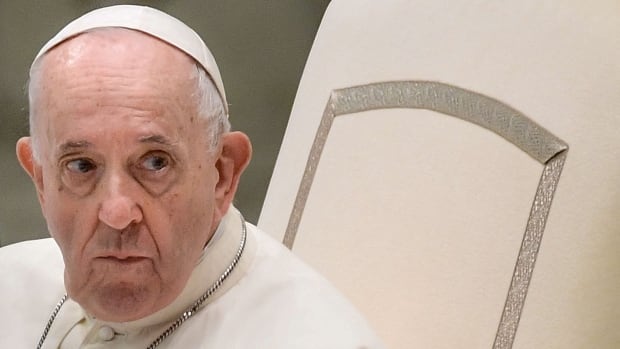 Pope Francis will be in Quebec City July 27-29 as part of a week-long trip to Canada to advance reconciliation and healing between the Roman Catholic Church and First Nations, Métis and Inuit communities who have suffered from years of abuse in the residential school system.

Here is a guide to the events you can expect during the visit.

What public events are planned when the Pope comes to Quebec?

The pope will arrive in Quebec on Wednesday, July 27 just after 3 p.m. ET.

His arrival, his public address and his meeting with government officials will be broadcast on giant screens on the Plains of Abraham in two places: behind the Quebec Armory and in front of the National Museum of Fine Arts of Quebec. Plains venues will accommodate up to 160,000 people and will be on a first-come, first-served basis.

On Thursday, July 28, the pope will hold a mass at 10 a.m. ET at the Sainte-Anne-de-Beaupré basilica, about 30 kilometers northeast of Quebec City.

Seating at the Basilica is limited and tickets for the general public have already sold out, but the event will also be broadcast on the Plains.

According to the papal visit website, there will also be cultural activities before and after these main events, but the details of these activities are still being determined.

All of these events are free to the public.

The Pope will leave Quebec for Iqaluit on July 29.

Where can I attend Mass on July 28?

Seats inside the Basilica of Sainte-Anne-de-Beaupré are reserved for Aboriginal participants, delegations from dioceses in Eastern Canada and certain government representatives. Papal Visit Planning Committee Confirms Residential School Survivors will get front row seats at the event.

Some 10,000 seats will be installed outside the sanctuary, the mass being broadcast there on giant screens. Two thousand of these places are intended for the general public, but all the tickets have already been torn off.

The Assembly of First Nations of Quebec is responsible for ensuring that places are distributed equitably among the Aboriginal communities of the province. Indigenous people wishing to attend the event should contact their country’s designated representative to secure a spot.

The planning committee for the papal visit to Quebec is asking those who do not have tickets to avoid the area and instead watch the mass on the Plains of Abraham, where the mass will be broadcast on giant screens so that everyone everyone can look at it.

The Mass will also be streamed live on the Papal Visit website.

It will be in Spanish, the pope’s native language, but there will be English and French subtitles on the outside screens. The Mass will also be translated into 12 indigenous languages ​​on the Papal Visit website.

What should I bring if I plan to attend the events?

The planning committee advises people to bring their own lawn chairs, small umbrellas or parasols for sun protection and coolers with food and snacks. People should also bring plenty of water and sunscreen.

Bottled water will be distributed to all who need it at the Basilica, and water bottle refill stations will be available at all sites where Mass is broadcast. Quebec City has also indicated that there will be foggers on the Plains of Abraham to help people cool off.

The planning committee says there will be enough toilets at each site. Medical personnel will also be stationed at each site.

No automobile traffic will be permitted to and from the Sainte-Anne-de-Beaupré Basilica. Ticket holders must use a shuttle service that will bring them to the site. More than 80 shuttles are planned for this event. The shuttles will leave from two locations: the ExpoCité Videotron Center in Quebec City and the Mont-Sainte-Anne parking lot.

Those camping or staying in a hotel in Sainte-Anne-de-Beaupré will be able to walk to the basilica and go through security checks directly at the site.

The City of Quebec asks those who plan to attend the event on the Plains of Abraham to get there on foot or take public transport to avoid traffic jams downtown.

What kind of support will be available for survivors and their families?

Indigenous Services Canada has partnered with the Catholic Church to ensure residential school survivors and their loved ones have access to trauma-informed wellness support systems, including traditional healers and elders, throughout the papal visit. Mental health support workers will also be present at each site.

National helplines and other mental wellness services will continue to be available during the papal visit:

What impact will this have on traffic?

The highway will be completely closed to trucks, RVs, cars with trailers and all other types of heavy vehicles between the Île d’Orléans bridge and Highway 360 in Beaupré. These vehicles will have to make a detour via highways 175 and 172 in the Saguenay region. The Ministry of Transport specifies that trucking associations and companies have already been notified of this disruption.

Emergency vehicles will still be allowed to drive. Residents and businesses located along Route 138 have already been notified of the disruptions, according to the Sûreté provincial du Québec.

In Quebec, Mayor Bruno Marchand is asking people to avoid driving in Old Quebec and the Plains of Abraham as much as possible and to work from home if they can. Traffic disruptions are to be expected downtown and around Jean Lesage airport.

More details will be shared on this page as new information becomes available.