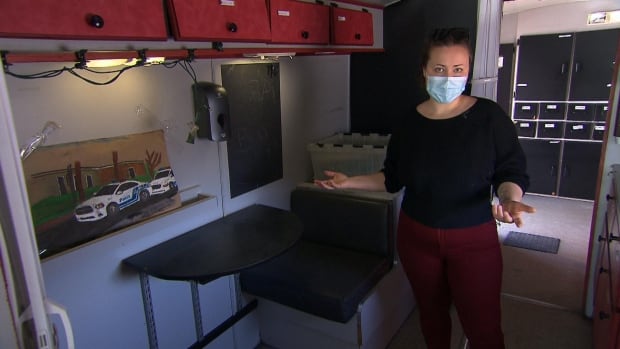 A Montreal non-profit organization needs a new bus so it can continue to provide a range of harm reduction services and supplies to people living in precarious situations across the city.

Anonymous already has a traveling six-wheeler on the road all week, but the bus, with its funky, eye-catching paint job, has seen better days.

It’s over 10 years old, has about 215,000 kilometers on the clock and has trouble staying on the road, said Kim Brière-Charest, the organization’s relations coordinator.

“It’s missing a hubcap. It’s missing a bit of paint. And about once a week it’s in the garage getting fixed. So L’Anonyme is raising money to get a new one,” she said.

It will cost around $500,000 to buy a new bus and customize it for mobile community service. So far, the government is not offering to fund the purchase.

It also distributes safety supplies such as condoms, clean syringes and naloxone kits that can be used in the event of an opioid overdose.

Although the organization receives government funding, it is forced to look to the public for help in raising the necessary funds for big expenses like a bus.

This lack of government funding for crucial community health services that work to prevent illness, disease and death is a growing problem, said Jean-Francois Mary.

He runs CACTUS Montreal, a community organization that offers a supervised injection site and other services to drug users, sex workers and trans people.

Organizations such as CACTUS and L’Anonyme rely on the same source of funding which, allocated by the Quebec Ministry of Health in large part to the fight against sexually transmitted diseases, has not increased for twenty years, Mary said.

He likens it to a pie, saying organizations need more shares every year, but the province refuses to make a bigger pie.

At the same time, the rate of inflation and the demand for such services have skyrocketed, he said, meaning the government’s contribution barely covers salaries.

Although it is an essential community health service, public funding is not enough to cover organizations’ overhead costs such as rent, electricity or vehicles, he said.

CACTUS receives some 70,000 visits a year and distributes half a million syringes, he said. And these days, community workers are dealing with a sharp rise in overdoses — something never seen before, he said.

“Now we’re in a situation where we have a responsibility to keep people alive,” Mary said. “It’s very different and that needs to be taken into account by the government. The situation has totally changed.”

Services like L’Anonyme’s bus are an essential part of the public health network, he said, but still can’t get the funding needed to effectively deliver those services.

Half a million dollars needed to buy a bus

Anonymous has raised around $30,000 so far to purchase and customize a new bus.

In addition to reaching out to the community, the organization also reached out to corporate partners, said Guillaume Faucher, their communications coordinator.

“There is a chance that we will have some good news to announce in the next few weeks on this,” said Faucher, who said they were also reaching out to all levels of government.

The Hochelaga-Maisonneuve borough has indicated that it expects to make a decision on whether or not to fund the project by next week, said Julie Bellemare, spokesperson for the borough.

The bus goes to underserved areas of Montreal, mainly in Hochelaga-Maisonneuve, downtown and the southwest. People can rely on the mobile help desk as a supervised consumption site and fentanyl test kits that can be used to test for the potentially deadly opioid.

The organization would like to offer more services, such as a mobile screening test that would allow people to know exactly what they are consuming.

The bus is also on sale in case anyone is interested, but only if they’re willing to shell out more than $500,000 for it, Brière-Charest said.

It has counter space and plenty of drawers and storage for supplies. A buyer could take it all, as is, with everything inside.