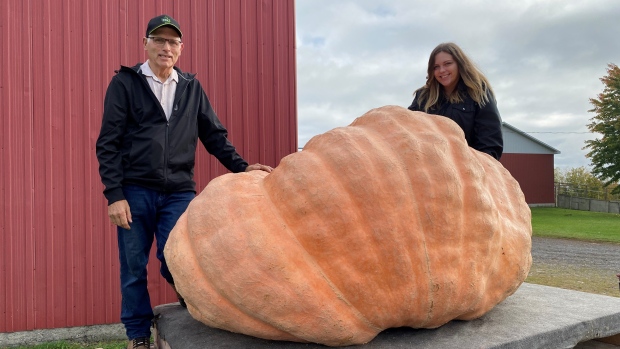 The 2006.5-pound pumpkin sits on a trailer on the lawn, alongside a slightly larger, but lighter, pumpkin known as “Alice I.” The pair are slightly off balance and aren’t praised for their looks, but for their weight.

“Alice” set a new Canadian record as the country’s first pumpkin to weigh over a ton.

Jim and Kelsey Bryson’s father-daughter duo are well known in competitive pumpkin growing circles. They broke the world record in 2011 with 1,800 pounds.

During the hottest days of summer, he goes out into the pumpkin patch every 20 minutes to make sure the leaves don’t burn and the squash have enough water. Each 950 square foot plot of land can produce a giant pumpkin.

â€œWe don’t cultivate the soil at all,â€ Kelsey said, â€œwe do cover crops and we use biostimulants. These are changes we’ve only been making for five years, so we need to be prepared to change. “

The Brysons also use a secret ingredient: maple syrup.

â€œIt’s more for the germs in the soil,â€ Jim said.

They use a spray to inject the syrup into the soil around the pumpkins. In the height of summer, squash can weigh up to 60 lbs per day. Once they have grown to a gigantic size, the walls can be up to 16 inches thick.

Alice broke the record in Port Elgin, Ontario. Pumpkin Festival. Kelsey lights up as she recounts the moment they found out they had broken the record.

â€œWe’re on the scale and they put the pumpkin on, but they put it on a little bit wrong so dad is helping them readjust it to fit on the scale properly,â€ she said.

â€œThe number says over 2,000 pounds, so I think there are people standing on the scales. I got daddy and I think there’s no way it can’t happen. We turn around and I look at my dad and I accidentally pushed him somehow by accident he almost fell. We were in tears and we didn’t expect it at all, â€she said.

Kelsey notes that they get a lot of attention carrying the huge pumpkin down the freeway.

â€œIt can sometimes take us around 45 minutes to get gasoline because when we stop people want photos and ask us questions,â€ she said.

Drivers also honk and slow down to see better as they pass.

The most common question they are asked is how many pies a pumpkin can produce.

â€œYou wouldn’t want to make pies from this variety,â€ Jim said, â€œthat would be pretty bitter.â€

The Brysons hope to surpass this year’s winner with an even heavier pumpkin next year.

The current Guinness world record is held by Belgian Mathias Willemijns with his 2,624 pound gourd.