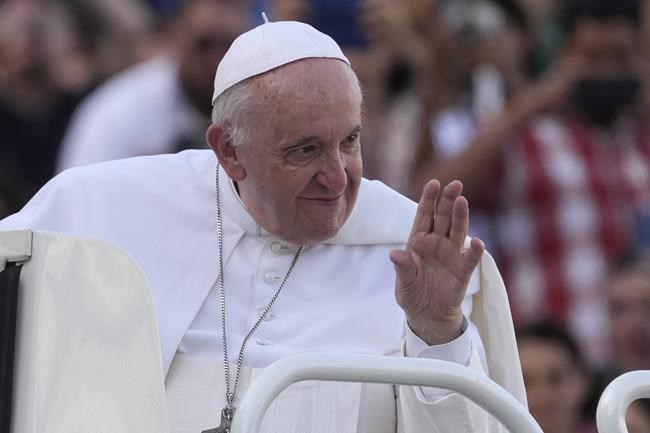 QUEBEC CITY — Those with tickets to attend the Pope’s mass northeast of Quebec City at the end of this month will start their day very early, but a spokesperson who wondered if the schedule would be too hard for aboriginal elders now say this is the best plan.

Organizers of the papal visit to Quebec said only shuttles from two designated locations at the Videotron Center or Mont-Ste-Anne will take people to the shrine of Ste-Anne-de-Beaupré, northeast of Quebec. , for the mass of July 28.

No vehicles will be allowed on the site and you are asked to queue at 4 a.m. for the shuttles which will only run between 5 a.m. and 7 a.m., with a long wait for the mass which begins at 10 a.m.

During a briefing last week, Jasmin Lemieux-Lefebvre, spokesperson for Quebec Indigenous Community Visitation and Liaison, said he wondered if it was excessive to ask survivors of residential schools, many of whom are seniors, to arrive early for the shuttles.

“I didn’t know if that was too much to ask,” Lemieux-Lefebvre said, adding that he’s now convinced the plan is the best. “We have done our best to find the right balance between safety and a decent and important welcome for all residential school survivors.

Pope Francis is due to visit Canada July 24-29, traveling to Alberta, Quebec and Nunavut. A major theme of his visit is reconciliation with Indigenous peoples for abuses suffered in residential schools – many of which were run by Catholic clergy.

Around 1,600 people will be allowed inside the sanctuary for the event, including around 10,000 on the grounds to watch on large screens. Seventy percent of tickets are reserved for Indigenous communities and approximately 2,000 general public tickets were purchased in approximately 10 minutes.

“If you don’t have a ticket, for the love of God, don’t show up at Sainte-Anne-de-Beaupré,” said Benoit Thibault, head of the Quebec organizing committee, describing the plans for the events as a “great logistics operation”.

Given the long wait, organizers are encouraging attendees to bring food, a camping chair, umbrellas and coolers with refreshments. Psychological support services will be offered to Aboriginal participants. A small field hospital will also be set up to provide necessary medical care as well as sanitary facilities.

Pope Francis is expected on site approximately 45 minutes before the event and will deliver Mass in Spanish, his first language.

Large screens on site outside will provide French and English subtitles. Thanks to the website of the official visit of the pope, the mass will be translated into a dozen indigenous languages.

For those who do not have a ticket, they will be able to watch live on the Plains of Abraham in Quebec. Cinémas Guzzo, a chain of independent movie theaters in Quebec, will also broadcast the event live on 143 screens in its theaters in the Montreal area.

This report from The Canadian Press was first published on July 17, 2022.