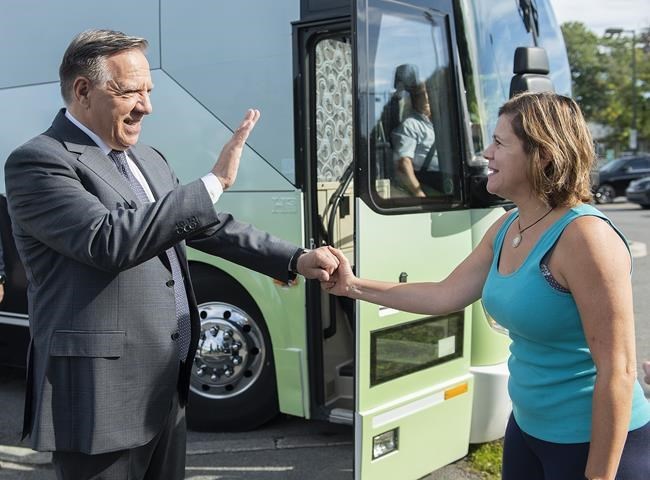 MONTREAL — The Coalition Avenir Québec promised on Saturday to build a pair of private medical centers that would offer services that would be free for Quebecers and reimbursed by Medicare in a bid to relieve public emergencies.

CAQ leader François Legault made the announcement on Day 7 of the Quebec election campaign in the riding of Anjou-Louis-Riel, in eastern Montreal, an area where the party hopes to increase its presence. on the island of Montreal where it currently holds only two seats. .

Legault said the first two clinics would be operational by 2025 in east Montreal and Quebec City, with plans to eventually build up to a dozen across the province.

Legault described the proposed centers, privately built for $35 million, as somewhere between a family clinic and a large hospital. They would aim to ease the pressure on the Quebec health network, he added.

The medical centers would include a family medicine clinic, other basic health services and an emergency room for minor or lower priority cases and day surgeries.

Legault said using the word “private” in health care is “tricky,” but noted that 20% of services in the province are already provided by the private sector.

More than 21,000 Quebecers are waiting for surgery in the province. At the height of the COVID-19 pandemic, Quebec sent some patients for treatment privately to reduce some wait times.

“The private sector can be complementary to what we do,” said Christian Dubé, the province’s newest health minister, who is seeking re-election. “The more we are going to settle (minor cases), the more it leaves room for surgeons in major hospitals… to tackle the waiting list.”

The CAQ’s promise was denounced by political rivals, the co-spokesperson of Québec solidaire, Gabriel Nadeau-Dubois, affirming that if the involvement of the private sector really worked in the field of health, there would already be many examples.

“Francois Legault persists with solutions that don’t work,” said Nadeau-Dubois, whose party has proposed improving community clinics and turning the province’s 811 health line into a true triage service. “The reality is that he has a dogmatic love for the private. sector and that it persists with proposals that weaken our system.”

Liberal Leader Dominique Anglade said the private system should only be used to deal with surgical backlogs.

The Conservative Party of Quebec has also promised to make more room for private health care as part of its plan. But Legault said Saturday’s promise had “nothing to do with what’s happening in other parties” and the CAQ believes the emergency room is too often the main point of entry for patients.

On Day 7 of the provincial election campaign, Québec solidaire pledged 37,000 new subsidized child care spaces if elected during a stop in Rimouski, Que., in the Bas-Saint-Laurent region.

For its part, the Parti Québécois is committed to integrating private daycare centers into the public system, converting 119,000 places in five years at a cost of $543 million per year. PQ leader Paul St-Pierre Plamondon said home daycares would not be part of the conversion plan.

Speaking in Senneterre, Quebec, in the Abitibi-Témiscamingue region, Anglade announced a $500 million plan to encourage seniors to return to work to address the labor shortage in the province through a number of measures, including increasing basic tax exemptions to ensure they are not penalized if you continue to work while drawing a pension.

The Liberals say that there are no less than 270,000 vacant jobs in Quebec.

Also on Saturday, Conservative leader Éric Duhaime visited a vineyard in the Mauricie region where he pledged to end the monopoly of the Société des alcools du Québec and to relax the rules regarding competition and where alcohol can be sold.

“The sale of alcohol must certainly be regulated, but not in the form of a state monopoly,” Duhaime said in a statement. “Currently, we are in an extremely complex and over-regulated system.”

This report from The Canadian Press was first published on September 3, 2022.

The lazy gardener prepares to lay down his tools