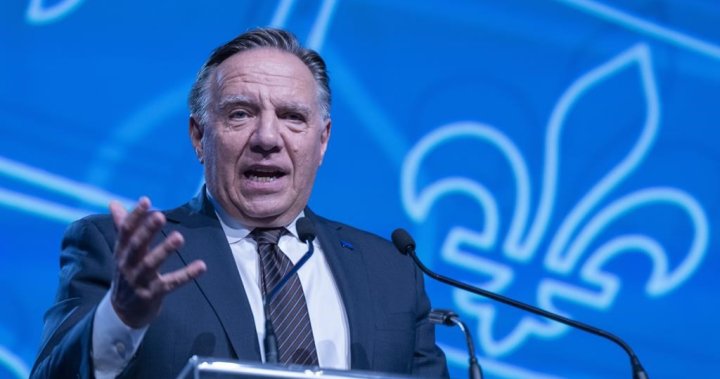 The leader of the Coalition Avenir Québec (CAQ), François Legault, said on Saturday that he did not intend to publish the results of a study on the potential impact of a “third link” crossing the river. Saint-Laurent from Quebec to its south shore, claiming it is outdated and does not directly involve the tunnel promised by his party.

Questions about a third link impact study have plagued Legault on the campaign trail in recent days after he admitted on Friday that there was no specific study for the project his party is championing, a $6.5 billion tunnel that would connect downtown Quebec and Lévis.

The study that Legault will not publish was carried out by the National School of Public Administration, which in 2019-2020 conducted research on the effects of large projects like the third link on residential, commercial and industrial development, as well as than on the protection of agricultural land.

Legault defended keeping that analysis secret on Saturday, noting that it does not directly address the proposed tunnel project or take into account the increase in telecommuting patterns during the COVID-19 pandemic.

“You’d be the first to tell me the study isn’t good,” Legault told reporters after announcing $538 million to create and expand provincial parks in Rimouski, Que., a riding once considered a stronghold of the Parti Québécois, but now seen as up for grabs.

1:51
The leader of the Parti Québécois mocks the opponent of the debate by forcing him to say the word N

Legault said he’s committed to publishing a study of his party’s favorite project when it’s ready, in 2023.

“This is the biggest investment in the greater Quebec City region in our history and Mr. Legault is acting as an amateur at the moment,” said the leader of the Conservative Party of Quebec, Eric Duhaime.

Duhaime was speaking in Levis, a day after holding the largest gathering of supporters of any political party until a few thousand supporters filled the lobby of the Videotron Center in Quebec City.

On Saturday, Duhaime promised to raise the speed limit on some Quebec highways to 120 km/h if his party wins on Oct. 3, saying most people exceed the current 100 km/h limit.

Even though driving faster increases a vehicle’s gas mileage – and associated pump costs – the Tory leader said people should be able to choose.

“Time is also money,” Duhaime said. “I think there are people who will appreciate gaining those 5 to 10 minutes, or 20 minutes, to go to Montreal with 10-15 km/h more.

READ MORE: Election in Quebec: the leaders face off tonight in the first electoral debate

In Montreal, Liberal Leader Dominique Anglade said she would organize a “COP Quebec” event similar to the major conference on climate change organized by the United Nations, with the participation of researchers, scientists and governments from across the country. North America.

Anglade also pledged to put all government decisions under the climate change microscope if elected, adding that the prime minister would be responsible for the environmental file.

Also in Montreal, the leader of the Parti Québécois, Paul St-Pierre Plamondon, declared that he wanted more space for Quebec youth programs and that he would put in place a series of measures to encourage the consumption of programs produced in Quebec.

The PQ’s cultural proposals are likely aimed at countering the survey results they cite, suggesting that the majority of Quebecers between the ages of 18 and 34 — 58% — consume very little or no local content on online platforms.

“It seems obvious that there has been a substitution of the Anglo-American cultural and mental universe to the detriment of the Quebec cultural space,” declared St-Pierre Plamondon. “And that has a lot of medium and long-term impact on the French language.”

St-Pierre Plamondon said he wanted to reverse this trend with more and better quality Quebec youth programming that would prioritize education over commercial sales.

But the PQ leader admitted he wouldn’t go so far as to abolish ‘Paw Patrol’, something that would make his two-year-old son ‘freak out’.