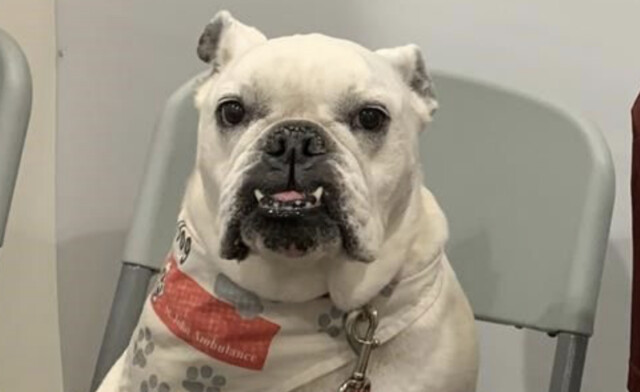 Last Friday, children who showed up to be vaccinated against COVID-19 in Quebec were surprised to find not only the promise of a sticker at the end of the ordeal, but also an eager waving tailed dog. to be stroked and potentially to allay their fears of getting the vaccine.

At least three provinces have been recruiting therapy dogs for months to help reassure children and adults nervous about getting syringes from vaccination clinics. Now specially trained dogs are being enlisted to help roll out vaccines for children ages five to 11.

Therapy dogs were on hand in Montreal on Friday to comfort some of the first children under 12 to be vaccinated after vaccines were approved for the younger age group.

Quebec zootherapists are now considering taking their dogs to schools as the pediatric vaccination campaign intensifies.

Children and adults scared of needles or worried about having a protective vaccine against COVID-19 have turned to therapy dogs to reduce their anxiety for months at some vaccination centers in Saskatchewan, Quebec and in British Columbia.

In British Columbia, the St. John Ambulance took its therapy dogs to Covid-19 vaccination clinics in Penticton and Trail.

FranÃ§oise Callamand-Mayer, a zootherapist from Montreal, was present on Friday with Indiana, her seven-year-old retriever / Bernese mountain dog, in a clinic where some of the first children aged five and over were vaccinated against the virus.

â€œI found children who were scared but my dog â€‹â€‹Indiana, who is a big girl, was always helpful,â€ she said. “Some were crying so hard, but they could stroke the dog and it was really magical. Within minutes, they touched the dog and they stopped crying.”

She plans to take Indiana and her three-year-old Cockerpoo Little Jones to schools and clinics so the kids can pet them while they get their shots. They may also sit on people’s knees or lie down next to them if they are particularly nervous.

She said parents had contacted her to see if one of her dogs could accompany their child to a vaccination center, adding that Quebec schools had also been in contact.

The pet worker said the dogs have a profoundly calming effect and have kept some people with an acute fear of needles from passing out in clinics.

Colleen Dell, a dog therapy expert at the University of Saskatchewan, took her trained therapy dog â€‹â€‹Anna-Belle to clinics in Saskatoon and saw the effect.

The professor said the white bulldog sat in a chair next to those getting the vaccine so they could pet it, which significantly reduced anxiety.

Dell said that “the more upset a person is before they receive their syringe, the more likely they are to find the experience of the needle stick painful.”

Dell said canine therapists are working with the Saskatchewan health authority as the vaccination campaign focused on children accelerates in that province.

â€œMaking the experience of injecting a syringe as positive as possible for children and adults is important because it determines how they will feel about coming back for a second,â€ she said. .

Dell said the dogs helped turn “a traumatic situation for some into a bearable one.” Therapy dogs, she added, also offer an alternative for people who might otherwise resort to anti-anxiety medication.

â€œReluctance to inject is widespread and is a much bigger problem than for our COVID vaccination clinics,â€ Dell said. â€œMost of the answers I’m aware of are medical, like taking a pill to calm down. Therapy dogs are a new option for bringing comfort, support, and fun to life.

Research shows that petting a dog releases oxytocin, a feel-good hormone, and lowers the stress hormone cortisol, so that “the patient feels comforted and supported at a time when they are feeling the most. vulnerable, â€Dell said.

Callamand-Mayer said the impact of his dogs has been profound for some people concerned that the needles will receive COVID-19 injections.

“One lady said, ‘I always passed out when I had an injection,'” said the therapist of a recent interaction with a vaccinee. “She said she was going to pass out and I put the dog over her on the bed and she didn’t. It was amazing. She couldn’t believe it.”