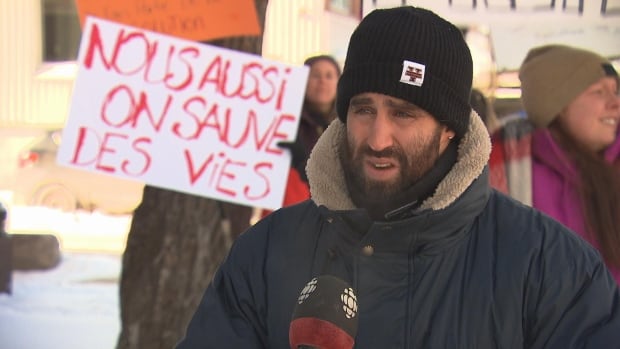 Demonstrations outside gymnasiums across Quebec in defiance of pandemic closures

The atmosphere was festive outside Gym Le Vestiaire in Montreal on Sunday, as gym members gathered and sang “All you need is sports!” to the tune of the Beatles classic “All you need is love”.

The facility was one of many across Quebec that staged protests to oppose the provincial government’s choice to exclude them from their pandemic reopening plan.

Last week, the province announced a phased reopening plan that will allow restaurants to open on Monday, followed by theaters and places of worship the following week, among other eased restrictions. However, no date has yet been set for the reopening of gyms.

“The first doors to reopen should be our doors,” said Karim El Hlimi, co-owner of Gym Le Vestiaire in Montreal’s Villeray neighborhood and one of the movement’s organizers. “We are not important in society, we are in last place.”

While discussions of physical and mental health have been front and center during the pandemic, what has been left out is the importance of physical activity needed to maintain good health, El Hlimi said. .

He helped boost the hashtag #lasantéenpremier (health first), so gyms can connect with each other on social media and mobilize.

Many originally planned to reopen illegally to prove they could still operate safely, but waited for fear of being fined.

360 Punch, a boxing club in Dorval, is an exception.

“It was busy today,” said Matthew Rusniak, manager and club owner. “In the past 24 months, gyms have been forced to close for 14 of those months. It’s been pretty brutal.

“Every moment I wait for the police to come in here and slap me with a big fine and lock us up. Unfortunately I have no choice not to open because if I stay closed we will end up closing our doors for long. Well.”

Gyms acting in defiance of current health measures could also see their requests for provincial aid canceled, a spokesperson for the Ministry of the Economy told Radio-Canada. The funds are disbursed on the condition that businesses forced to close comply with the restrictions in place.

“We are doing this for two reasons: to reduce the number of deaths and to ensure that we can keep the situation under control in our hospitals,” Prime Minister François Legault said on Sunday when asked about the protests at a press conference announcing a new CAQ Candidate in Marie-Victorin.

“I understand that people are fed up and want to be able to hit the gym and have big parties, but we had almost 2,900 [COVID-19] case since this morning.”

An association representing gym owners in Quebec says it tried to start a dialogue with the province about reopening, but had no luck.

“It’s not just that the answers aren’t satisfactory. There are no answers, no listening, no words,” said Gabriel Hardy, spokesperson for the Quebec section of the Canadian Council on the fitness industry, in an interview with The Canadian Press.

Hardy, who also owns Le Chalet gymnasium in Quebec, said the government ignored the issue, “despite the fact that we sent letters, that we communicated regularly – not only with public health, but with the Ministry of Economy, Ministry of Labor and Deputy Ministry of Sports.

The association said it did not approve of announcements made by some to reopen illegally.