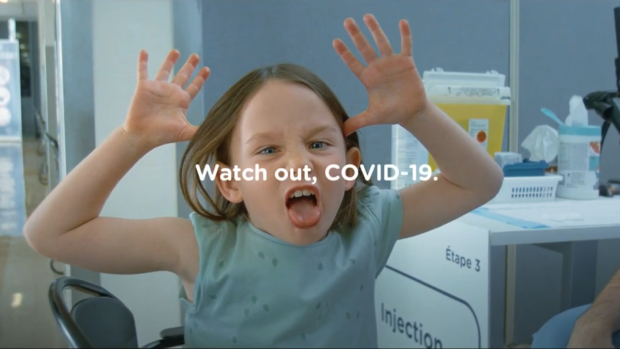 QUEBEC – The government of Quebec launched on Sunday the second part of its advertising campaign focused on immunizing children against COVID-19.

The advertisements, which will be shown on television, the web and in print media, are designed to remind parents of the benefits of vaccination, including limiting the risk of transmitting COVID-19 to their families and loved ones, explains the Executive Council of the Ministry in an outlet.

The 30-second ad shows a little girl surrounded by loved ones blowing out a candle for her seventh birthday, a young boy hugging an elderly person, and other children playing hockey in an alleyway.

The ad, which incorporates dramatic music and is punctuated by grimaces, ends with a little girl who, after being vaccinated, shouts â€œWatch out, COVID-19! (Hang on tight, COVID-19), which is the theme of this part of the campaign.

This second set of commercials is more humorous than those featuring popular science scientist Martin Carli.

The first part of the campaign was unveiled on Wednesday, when the vaccination of 5 to 11 year olds in Quebec began with the administration of the first vaccines.

As of Friday, 29,876 children in this age group had been vaccinated, or 5% of them, according to data from the Quebec Ministry of Health.

– This report by La Presse Canadienne was first published in French on November 28, 2021.

Video shows Quebec police hitting and pushing snow on the face of a black youth while he was stranded, investigation underway