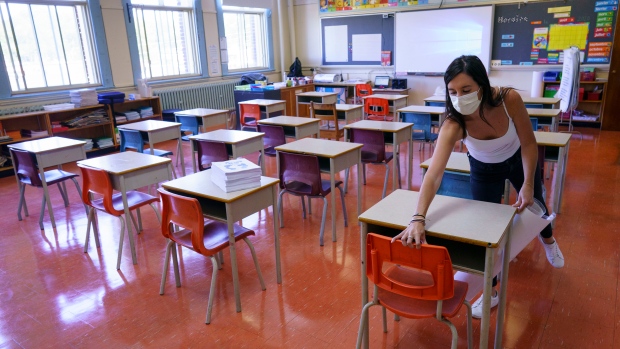 Collective agreement ratified between Quebec and the FAE teachers’ union

QUEBEC – The Autonomous Federation of Education (FAE) on Wednesday signed a new contract with the government which will apply to its 49,000 members.

This signing marks the end of a round of negotiations that began almost two years ago.

“It’s a very good agreement,” declared FAE president Sylvain Mallette at a press conference at the National Assembly. â€œWe have made over 43 contract changes.

The new collective agreement also provides for the elimination of a salary level on March 31, 2023, which will allow teachers to reach the maximum level after 13 years of service instead of the current 14 years.

“It pays to be a teacher,” said Minister of Education Jean-FranÃ§ois Roberge. He believes this new employment contract will help solve the teacher shortage.

“It will help us out of the crisis,” he said.

The President of the Treasury Board, Sonia LeBel, called the agreement “historic” because it changes the organization of work and gives more autonomy to teachers.

â€œWe are freeing up a lot of teachers’ time where they were supervising, for example, during recess. This time is going to be reclaimed so that teachers can be involved with the students,â€ said LeBel.

The FAE represents 49,000 primary, secondary and vocational training teachers. It is independent of the big unions.

– This report by La Presse Canadienne was first published in French on September 29, 2021.

Rodney Levi could have been saved by community police, inquest witness says