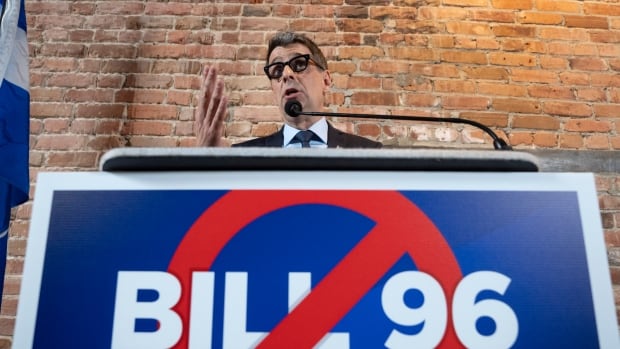 “We don’t see the English-speaking community in Quebec as a threat, we see them as allies.”

It’s day 10 of the Quebec election campaign and for the first time, Éric Duhaime is holding a press conference half in English and half in French.

However, the leader of the Conservative Party of Quebec is doing something even bolder for this province. He stands in front of a podium with a sign written only in English, with the word “Bill 96” crossed out in red.

“Unlike the Liberals, we haven’t flip-flopped twice, three times. We haven’t betrayed the English-speaking community,” Duhaime said. “We would not deny the fundamental rights and freedoms of any Quebecer.”

Everything in the ad seems calculated. Bilingualism, signage, journalists’ questions alternating between English and French, and the press release issued in both languages.

At other events earlier in the campaign, Duhaime would only say two or three sentences in English to sum up the announcement – ​​if that’s the case.

“I urge all Anglophones to seriously consider voting for the Conservative Party of Quebec,” Duhaime said Tuesday.

He does not hesitate to blame the Liberal Party of Quebec for “taking advantage of the Anglophone community”.

That’s how Bonnie Feigenbaum feels. The longtime provincial Liberal was recruited by the Conservatives to run in the riding of D’Arcy-McGee, made up of the municipalities of Côte-Saint-Luc and Hampstead, both of which have large English-speaking populations.

Duhaime sees an opening, just as his previous party, the Action Démocratique du Québec, did nearly two decades ago.

Then, as now, attention was focused on predominantly Anglophone and allophone ridings, primarily in Montreal.

It didn’t work for the ADQ.

“A minority does not benefit from being hostage to a single party,” says Duhaime, of Anglos and Liberals.

“Those who vote based on linguistic rights, there is no threat. [Anglos] can vote for us. We are not a separatist party,” Duhaime said.

When asked if there was a referendum now, Duhaime said he would vote against it, but he wouldn’t go so far as to say that holding a referendum would never take place under his leadership.

Legault accuses Montrealers of “despising” the people of Quebec and Lévis