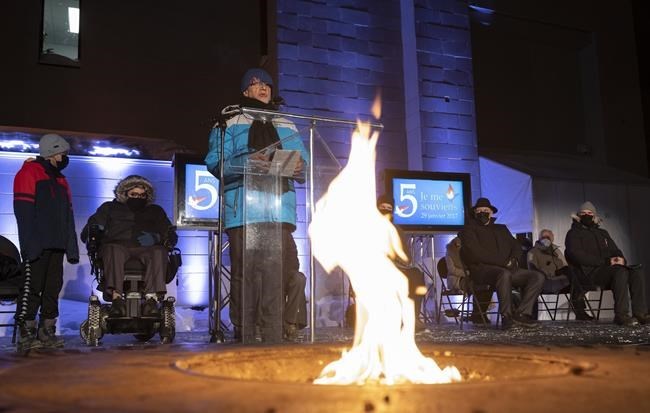 QUEBEC CITY — At times, Hakim Chambaz paused as he spoke at a memorial marking the fifth anniversary of the Quebec mosque attack, overcome with emotion.

QUEBEC CITY — At times, Hakim Chambaz paused as he spoke at a memorial marking the fifth anniversary of the Quebec mosque attack, overcome with emotion.

Chambaz, one of the survivors of the attack that left six people dead and five others seriously injured, spoke in a shaky voice about how the experience will always be with him.

“There was a choice between shutting up and trying to forget and between facing this tragedy and learning from this horrible part of our lives,” said Chambaz, who helped start a group that supports victims of other terrorist attacks.

“We hope for a better future for our children, especially for the families of the victims, and we pray to Allah to welcome them to their paradise,” he said.

The ceremony at the Islamic Cultural Center of Quebec was one of many held across Canada to honor this grim anniversary, as well as the first National Day of Commemoration of the Attack on the Quebec Mosque and of Action Against the Islamophobia, proclaimed last April.

Aymen Derbali, who was paralyzed in the attack, said the ceremony was part of “our duty to remember our brothers who fell that night under the bullets of hatred”.

His voice shook as he called on people to work together to ensure similar events never happen again.

The Quebec event, in front of the mosque in Ste-Foy, a suburban borough of the provincial capital, was largely virtual due to the COVID-19 pandemic, with the general public encouraged to watch the commemoration online.

Marchand described the deceased men as Quebecers known for their contribution to the community.

“Fathers, who are no longer there to take care of their children, take part in the important events of their lives, to take the hand of their wives, share the pride of a great achievement with their colleagues, men who are not no longer there to reach out to a friend in need,” he said. “It was six of us.”

Among those who spoke at the commemoration was Nusaiba Al-Azem, vice president of the London Muslim Mosque in London, Ontario. On June 6, 2021, four members of a Muslim family were killed in this city while they were walking. Police said they believe the family members were targeted because of their faith, and the man charged in the case now faces murder and terrorism charges.

Al-Azem said the commemorations are not aimed at members of the Muslim community, as Islamophobia is a daily reminder of deadly attacks.

A memorial ceremony was held at the London Mosque earlier on Saturday.

In Ottawa, organizers of an in-person interfaith vigil to commemorate the attack said they decided to put it online over fears the event would be targeted by members of a convoy that is in the city to protest COVID-19 regulations.

Fareed Khan, who organized the event with his group Canadians United Against Hate, said that while the protesters describe themselves as pro-“freedom”, they are depriving others of their freedoms.

“They’re talking about the freedom to be able to be irresponsible individuals and not be vaccinated and possibly spread COVID-19 across Canada,” he said in an interview. “During this time, our freedom has been deprived, our freedom to gather peacefully to commemorate the victims of a brutal crime on a very sacred day. It is frustrating and unnerving.”

Khan said that while his group received no direct threats, the decision to move the vigil – which was to take place in downtown Ottawa – was made after consultation with police and city officials.

He said he would like to see concrete actions from Canada’s political leaders to combat Islamophobia and other forms of hatred.

“We can’t let voices of hate target minority communities, whether it’s Muslim, Jewish, Black, Indigenous, Asian, LGBTQ, we need to make sure we stand up to them. those voices,” Khan said. “We sometimes have to take to the streets and be visible and say, ‘No, we won’t tolerate this in our country. “”

This report from The Canadian Press was first published on January 29, 2022.

This story was produced with financial assistance from Facebook and the Canadian Press News Fellowship.

Quebec restaurants reopen, but some former workers do not intend to return