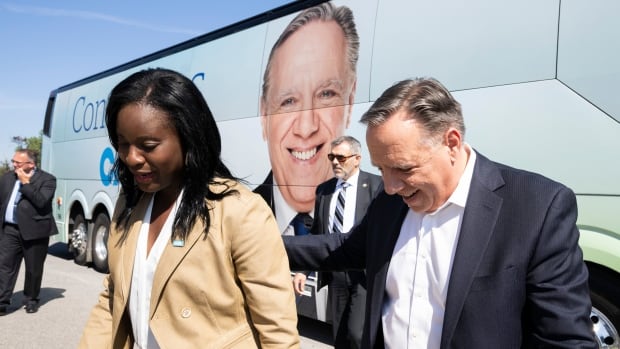 As François Legault walked around the room of a Laval pizzeria, smiling and shaking hands, he stopped and delivered a message to four men having lunch at a table.

“It’s time for things to change in Laval,” said the leader of the Coalition Avenir Québec during the campaign event in the riding of Mille-Îles on Monday. “We have to change the colors.”

En route to what it hopes will be a landslide victory for a second term, the CAQ is seeking to turn the province’s third-largest city from Liberal red to CAQ blue.

In 2018, the Liberal Party of Quebec (PLQ) won five out of six seats in Laval, with only one seat going to the CAQ.

This year, however, nearly all of the candidates who won under the Liberal banner four years ago have left. This includes Francine Charbonneau, who has represented the Mille-Îles riding since 2008.

The CAQ hopes that Julie Séide, a longtime member of the party, will be able to break into this constituency.

“This year, I’m convinced it’s the right one. It’s the right year for Julie, and she’s coming to Quebec,” Legault told the small crowd at the restaurant while standing next to Séide, who finished a distant second behind a Liberal. in the riding of Bourassa-Sauvé north of Montreal in 2018.

Several Laval Liberal incumbents left. Charbonneau, Jean Rousselle, Monique Sauvé have all left politics. The same goes for Guy Ouellette, the incumbent MP for Chomedey who was expelled from caucus shortly after the 2018 election.

In most of the five Laval ridings that the Liberals won in the last election, the CAQ finished second — and narrowly.

“These ridings in 2018 were won by very close margins,” said Philippe J. Fournier, an expert and polling analyst behind the 338Canada Survey Aggregator.

“If you apply the current poll, especially among Francophones, unless there is a micro-local target that we missed in the poll, the Liberals will be swept away from Laval except for Chomedey.

“We feel comfortable in this situation”: Liberal candidate

Saul Polo, who was elected twice in the riding of Laval-des-Rapides, is not disconcerted by what the pundits are saying.

“In the last two general elections, the odds were always against me and this time it’s no different,” Polo said at a campaign event in Laval last Sunday.

“We feel comfortable in this situation.”

Earlier in the campaign, Quebec Liberal Leader Dominique Anglade said the party was playing offense, not defense, when it comes to Laval ridings.

“It’s not just about keeping seats in Laval, it’s about getting Sainte-Rose,” Anglade said, referring to the only riding the CAQ managed to win last time out.

Laval Mayor Stephane Boyer has noticed the increased attention paid to his city by party leaders, and he wholeheartedly agrees, believing it could lead to more commitments from future governments.

“I’m glad there’s a tough battle in Laval,” he said. “Historically, in Laval, there has been a lot of underinvestment in different areas, whether it be culture, public transit or others.

The CAQ is also targeting places in Montreal

Despite the CAQ’s dominating election victory in 2018, it has yet to make a major dent in Montreal.

At the start of this election campaign, the party held only two ridings in the city: Camille-Laurin (formerly known as Bourget) and Pointe-aux-Trembles — both at the eastern end of the island.

That could change on October 3, according to Fournier. He says the eastern riding of Anjou–Louis-Riel and the riding of Maurice-Richard, which includes part of the city’s Ahuntsic neighborhood, are at stake.

In 2018, as in Laval, these two ridings elected Liberal MPs who did not run this time around.

“Basically you look at the data for francophones by riding and anywhere you have more than 60% francophones, the Liberals are in trouble,” Fournier said.

Jonathan Marleau, the Liberal candidate for Maurice-Richard, said he believes the party’s door-to-door efforts are paying off and has ruled out talks of a CAQ takeover.

He also said Legault’s controversial comments on immigration are not well received by voters in and around Montreal.

“In Ahuntsic, of course, people come from all walks of life, very diverse,” said Marleau. “When they talk to me, they say it’s something they’re not very comfortable with. Because they want a leader to say that all Quebecers matter.”

CAQ progress in and around Montreal, including Laval, would be a blow to the Liberals, who suffered historic losses in the last provincial election, dropping from 68 seats to just 31.