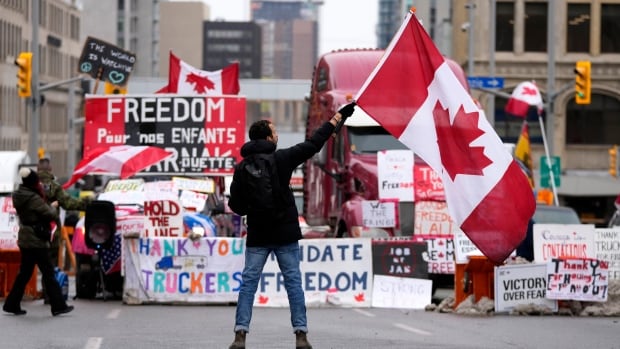 Victor Crapnell recalls the feeling of unease he felt watching the Freedom Convoy protests unfold in his hometown of Ottawa in February. The feeling came when he saw the red and white maple leaf on the Canadian flag stand out against the snowy background.

The Victoria resident says seeing the image of the flag displayed so prominently, on some occasions alongside Confederate and Nazi flags, has stirred emotions he says he has never associated with the country’s most recognizable symbol.

“It kind of struck me that our beautiful flag was hijacked as a symbol of protest,” Crapnell said. “And I thought, ‘This is not right.'”

With that in mind, the designer created a sticker this spring with an image of a Canadian flag crushing a tractor-trailer and the words “Canada, take back your flag” circling the image. At the request of his wife, so as not to disparage all truckers, he added a misspelled Freedom Convoy logo to the truck.

Crapnell’s plan to reclaim what he believes to be the flag’s rightful meaning has sparked nationwide interest. He says he has shipped over 1,600 stickers nationwide.

“Our flag has always had a reputation around the world for friendliness, tolerance and acceptance, and it really pained me to see it damaged,” Crapnell said.

As Canada Day approaches, some groups linked to the February protests have vowed to return to Ottawa, prompting some to denounce protesters with the convoy using the flag as their favorite protest symbol. People like Crapnell argue that it’s a symbol of unity, not a symbol that should represent divisions over vaccines and pandemic policies.

“Now all of a sudden it’s been taken over by people who have a very extreme political agenda, they are, in my opinion, desecrating the flag by using it as a sort of false flag,” Lloyd Axworthy said. , a former Liberal foreign minister.

“As a result, it diminishes its importance and meaning to many Canadians.”

The debate comes as Ottawa police try to prevent another occupation, as MPs are given panic buttons to deal with a growing number of threats, and a Quebec judge says he and his colleagues are facing to threats after hearing cases related to the convoy protests.

Differing views on the symbolism of the flag

Jason Kowalyshyn of Take Action Canada, a group opposed to vaccination mandates and COVID restrictions, is traveling from Hamilton, Ontario to be in Ottawa this weekend. He says the flag will be as prominent as it was at previous protests.

“We should all be united under the flag,” he said. “From my point of view, the flag has more meaning now because it represents patriotism and freedom.”

Kowalyshyn said that when he was driving and saw a car with a Canadian flag, he liked it.

“Usually I wave at them and they smile and they know why I’m waving at them because they also understand that [the flag] represents our collective rights and freedoms that we stand for,” he said.

For Mohamad Fakih, on the other hand, seeing the flag flying over people’s cars brings a moment of doubt and hesitation.

Inside Fakih’s office, a large maple leaf hangs from a pole next to his desk. He says it represents an important symbol of inclusion, especially for people who have come to Canada from disparate countries in search of a better life. He says he feels the flag, and its association with protesters, sends the wrong message.

“We need to send a message that the flag will always remain the symbol of freedom, the symbol of diversity and inclusion of a great open country that welcomes people like me and not just welcomes them, celebrates them,” Fakih said.

He encourages Canadians to buy and display flags to reclaim the symbol, even putting a flag on his own car and posting it as a call to action on social media.

Get your Maple Leaf flag before July 1st. Display it prominently outside your home. Place it in a window. Mount it on your car. Elevate it by the lake or shore. Let’s see more and more flags every day – for an unforgettable Canada Day!#ShowTheFlag #FlyTheMapleLeaf pic.twitter.com/ABdme5LBSm

A history of controversy

The Canadian flag was a source of controversy long before the Freedom Convoy began using it. It is also a painful symbol for many indigenous peoples.

“The flag cannot be divorced from colonization, from the violence of genocide, that Indigenous peoples suffered,” says Niigaan Sinclair, who is Anishinaabe and a professor of Indigenous studies at the University of Manitoba.

He says Canadians began to understand this last year when flags were lowered last year to honor children who died in residential schools.

Forrest Pass, a vexillologist – flag expert – and curator at Library and Archives Canada, said the debate was fierce before the adoption of the maple leaf in 1965.

From the 1995 referendum to the 1998 flag waving – when Bloc Québécois MPs criticized the number of Canadian flags at the Olympics – he says the meaning of the maple leaf has always evolved.

“The flag has always been political and that’s something Canadians need to remember as we talk about the most controversial uses of the flag today,” Pass said.

While the protests in Ottawa involved a number of different groups, many with different agendas, Pass says traditional political symbols such as the flag can often be used to legitimize extreme beliefs.

Ottawa braces for protests to coincide with Canada Day

He says there may also have been a practical purpose behind the adoption of the flag: as a protective shield.

“I think they were negotiating that being arrested with a Canadian flag would look bad before the TV cameras rolled,” Pass said.

He says the type of flag waving amid protests seen in Canada today is heavily influenced by the United States, which has long used the flag as a patriotic symbol.

“It looks a lot like a show of American patriotism…and it’s a fairly recent development in Canada,” Pass said.

Mohamad Fakih says he recognizes there are a lot of different groups within the protests, but says he hopes they don’t outgrow Canada Day celebrations.

In Victoria, Victor Crapnell hopes the Canadian flag will be on full display across the country this weekend.

“I can’t wait to see the positive flags outweigh the negatives,” he said.