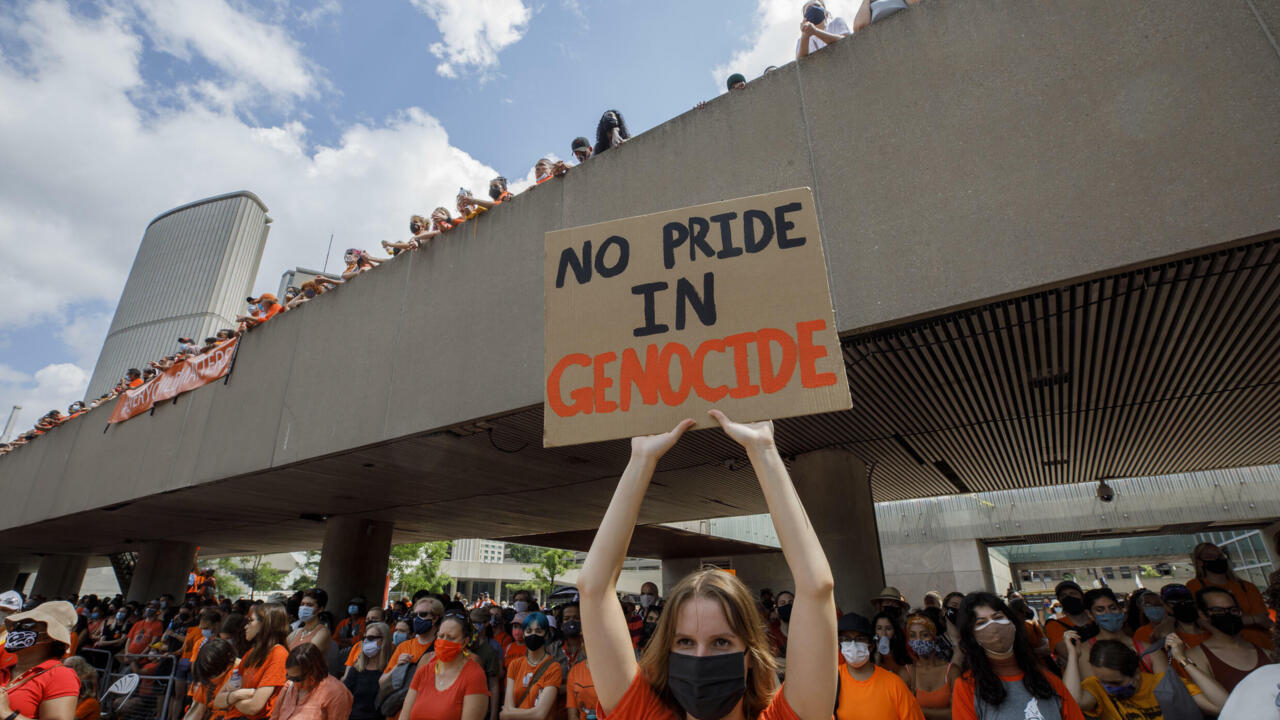 Canada’s National Day Thursday was marked by a grim toll of its colonial history, after more than 1,000 anonymous graves were discovered near former residential schools for Indigenous children.

Several cities across the country have canceled their traditional Canada Day celebrations, usually marked with fireworks and barbecues. The hashtag #CancelCanadaDay was all the rage on social media and rallies in support of the Indigenous community were held across the country.

The 154th anniversary of Canadian Confederation came a day after the discovery of 182 anonymous graves near a former residential school in British Columbia where Indigenous children were forcibly assimilated.

The find was the latest in a series that scandalized the country, with 751 similar graves found near a school in Marieval, western Saskatchewan, last week, and 215 discovered in late May in a another school in Kamloops, BC.

Until the 1990s, some 150,000 Aboriginal, Inuit and MÃ©tis youth were forcibly enrolled in 139 schools, where students were physically and sexually assaulted by principals and teachers who stripped them of their culture and language.

More than 4,000 have died of illness and neglect in schools, according to a commission of inquiry which concluded that Canada had committed “cultural genocide.”

“The horrific discoveries (…) have rightly prompted us to reflect on the historic failures of our country and the injustices that still exist for Indigenous peoples and many others in Canada,” Canadian Prime Minister Justin said on Thursday. Trudeau in a press release.

â€œAs Canadians, we need to be honest with ourselves about our past,â€ he said.

A few days after the discovery of Kamloops, the city council of Victoria, the capital of British Columbia, voted unanimously to cancel the planned virtual celebrations.

In Toronto, protesters marched early Thursday dressed in orange T-shirts in support of Indigenous communities, many carrying signs with slogans such as “No pride in the genocide.”

Thousands of people organized a similar rally in Montreal with slogans like “Happy denial day”.

“I come here because I have young children and I think it is important to send the message that we do not want our children to be touched, abused,” said ThÃ©rÃ¨se DubÃ©, 56, an indigenous woman. of the Akikamekw Nation. and a survivor of one of the Quebec residential schools.

April Courtney Kipling, a 29 year old Aboriginal woman, came to â€œremember, recognize all the children who will never come homeâ€.

Others had a more specific reason for showing up. â€œCanada Day is like celebrating genocide,â€ said Olivia Lya, a 22-year-old Innu woman.

â€œAnyone who celebrates Canada on July 1 is celebrating oppression,â€ Nakuset, co-organizer of the Native Women’s Refuge of Montreal, said in a statement.

Several Native people noted the presence of non-Native Canadians at the Montreal rally.

A statue of Queen Victoria, the 19th-century ruler of the British Empire, was covered in red paint and overturned in Winnipeg, in Canada’s central province of Manitoba, while at least ten churches suffered damage in Calgary, in the western province of Alberta, local media reported.

The Canadian flag on the Peace Tower in Ottawa was half-masted to honor Indigenous children, as was the flag on the central tower of the National Assembly of Quebec.

But Opposition Leader Erin O’Toole defended Canada Day. “The road to reconciliation does not start with tearing Canada down,” said the Conservative leader, admitting that Canada is “not a perfect country”.