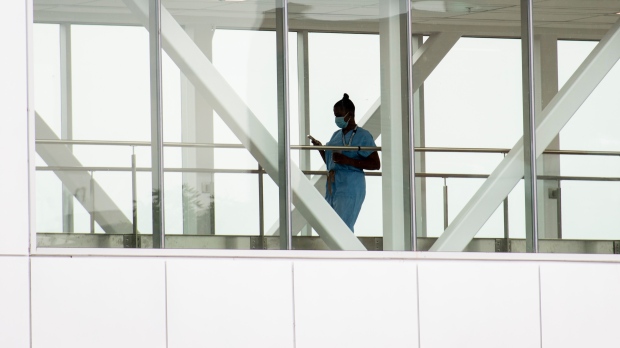 TORONTO – COVID-19 has thrown Canada’s already struggling healthcare system into chaos, forcing impossible choices when it comes to rebuilding once the pandemic has subsided.

Hospitals have been forced to cancel elective surgeries during pandemic peaks, creating already long lists now so long doctors fear patients will die in the meantime.

Meanwhile, nurses have been so exhausted from a year and a half of operations in a pandemic that they are leaving the industry in droves, leaving hospitals and health systems with the unpleasant choice of performing surgeries or to strengthen the nursing staff.

Almost 560,000 fewer surgeries were performed in the first 16 months of the pandemic compared to 2019, according to the latest figures from the Canadian Institute for Health Information. And the cost of resolving these arrears is expected to run into the billions.

But a Harvard professor from the former Soviet Union with an affinity for Canada claims he has the solution, and it’s already working in some Ontario hospitals.

â€œThis means you are reducing the wait time for surgery in Canada,â€ said Eugene Litvak, president of the Massachusetts nonprofit Institute for Health Care Optimization.

“It means more patients will be treated.”

It all comes down to how hospitals admit patients, he said.

Litvak said a patient flow tracking graph would look like an erratic EKG, with steep peaks and valleys, signaling a potential health disaster.

He said most sane people would assume that the inconsistent ebb and flow of hospital occupancy is caused by unforeseeable health emergencies.

â€œBut here’s the secret: that common sense and the delivery of health care are not compatible,â€ Litvak said.

In fact, he said, most of the variability is caused by scheduled procedures.

“It’s easier for me to predict when someone will break a leg and come to the hospital than when a scheduled surgery will take place. And that’s the heart of the matter,” he said.

Litvak says surgeons generally prefer to schedule their procedures early in the week to avoid being called to check on patients on the weekends.

This means surgical patients are occupying more beds earlier in the week, leaving people in the emergency room with long waits for admission. Hospitals are crowded in the middle of the week and nurses are overloaded with patients, he explained.

Litvak says the most common approach in Canada is to form task forces or make recommendations, a tactic he says only addresses symptoms rather than the cause of growing backlogs.

A more concrete solution, he suggests, should be to iron out disturbing peaks and troughs by putting equal demand on the system every day of the week when it comes to scheduled surgeries.

The idea is not new. Dr. Harvey Fineberg, former president of the National Academy of Medicine, touted the merits of standardizing hospital admissions across Canada during a health policy speech presented by Alberta Innovates in 2014.

â€œYou can work wonders on the flow of patients by making resources available and emptying emergency rooms,â€ Fineberg told his audience, which included health officials from Alberta.

“It is something that can be done without a single capital investment.”

The University Health Network in Toronto, which runs the nation’s largest surgical program, adopted the Institute for Health Care Optimization method shortly before the pandemic struck.

This involved reallocating the workload throughout the week, making sure there were a similar number of cases requiring intensive post-surgical care each day, for example.

At the same time, the hospital defined the degree of emergence of the different cases and the resources required to provide care.

The result has been a more predictable schedule for operating room staff, fewer canceled surgeries, cost savings, and more work to do.

“It’s the silver bullet in that we are doing more than ever with less, more efficiently,” said Dr. Shaf Keshavjee, chief surgeon at UHN and president of the American Association for Thoracic Surgery, the best university in the world. Society of Cardiac and Thoracic Surgeons.

While the method couldn’t attract more nurses or give bone-weary doctors a break, it has enabled Toronto hospitals to clear backlogs accumulated during the pandemic faster.

And because Litvak’s method requires accounting for what kind of resources are needed in which cases, Keshavjee also knows that the backlog is unlikely to be cleared until March 2023.

Keshavjee says the method is not without its challenges, saying it requires fine tuning on the part of the staff.

â€œIt’s a culture change and you have to do the job. Your hospital has to want to do it,â€ he said.

And while the system seems relatively straightforward, he says the approach taken by UHN is relatively unique in Canada. Although that may change now that more Canadian health authorities are turning to Litvak since the emergence of the Omicron variant of COVID-19, which threatens to drag the country into another potentially massive pandemic wave.

Litvak desperately hopes more hospitals will consider putting his method into practice to save both health care dollars and Canadian lives.

This report by The Canadian Press was first published on December 12, 2021.

No leaks, no injuries in the early morning train derailment in Ogden