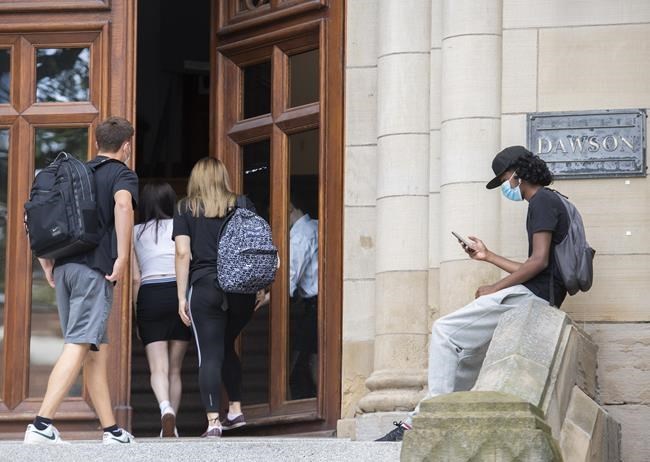 Colleges are the scapegoats for the perceived decline in the vitality of French in Quebec, they say, adding that if the bill passes, it would jeopardize student success and compromise the freedom of young Francophones to decide where they go. are going to school.

Bill 96 includes several changes restricting access to English-language junior colleges, including a cap on the number of students who can attend. The bill aims to bolster the province’s flagship language law, Bill 101, but two college system officials say the schools are being targeted by the government because of their success.

Bernard Tremblay, president of the association of junior colleges in Quebec — called cégeps — says that over the past decade English-language colleges have grown in popularity among francophones and allophones — students whose first language is not neither English nor French.

“We have made CEGEPs the scapegoat for the issue of the development of French in Quebec when we all know that the real question is ‘why do more and more young Francophones and allophones want to continue their education in English?’ said Tremblay, president of the Fédération des cégeps.

Blaming junior colleges, he said, is an attempt to find “a simple solution to a complex problem.”

Since hearings on Bill 96 resumed after the Christmas recess, lawmakers have approved a series of amendments that have raised alarm in the junior college community, which says it was not consulted on the changes.

These amendments would freeze the number of students enrolled in the Anglophone system at current levels, and they would not allow this number to increase even if the population of Anglophones increases in Quebec. They would also require all students in Anglophone colleges to take at least three core French courses, excluding French language courses.

This last proposal is of particular concern to Tremblay, who says his association estimates that about a third of English-speaking students — the vast majority of whom are bilingual — would struggle to pass or get good grades in French.

“This knowledge does not allow them to take a course in philosophy, anatomy or sociology in French and pass it at a level that guarantees them sufficient grades to enter university,” he said.

However, the amendments could backfire. Tremblay said they could push talented young Quebecers to move out of province to study, or they could make English-speaking CEGEPs even more attractive to French-speakers because the colleges would be more exclusive.

The Liberal opposition party, which had been the one to propose extending the French language requirement to English speakers, backtracked this week and suggested deleting its own amendment, admitting it had no not done enough counseling and that he didn’t want to see students fail.

John McMahon, executive director of Vanier College in Montreal, says English-language CEGEPs have been scapegoated in recent years by nationalist politicians who unfairly blame them for a perceived decline in the use of French. He said that over the past ten years the percentage of students in English colleges who are not native English speakers has risen from 30% to 60%.

McMahon says half of Vanier’s administrators are French-speaking and denies the school is a “bastion of anglicization,” noting that many of its graduates go on to study at French universities.

“I invite people to walk down the halls of Vanier College or Dawson College and John Abbott College or one of our (English speaking) colleges, they’re going to hear many languages; they’re going to see a wide variety of students with ethnic backgrounds,” he said.

Alexandrah Cardona, president of the students’ union at Dawson College in Montreal, says there is a lot of concern about how the changes will affect students.

Bill 96 would also require English-speaking CEGEPs to prioritize students who did their primary and secondary studies in English. In addition to concerns about the French language requirement, Cardona said she fears students will be deprived of the experience of going to school with colleagues from diverse backgrounds.

“Students work very hard to be accepted into Dawson because they believe in this diversity of community and program,” Cardona said. “Unfortunately to be thrown under the bus by the current government in an election year is truly hurtful.”

Cardona says the legislation goes against the spirit of the junior college system, which was created in the 1960s to increase access to higher education.

“It’s not just a question of how this specifically affects the English-speaking community; it’s even more important than that,” she said.

“It’s about why are we imposing restrictions on equitable access to education in a society where we have established this network (of CEGEPs) precisely for this purpose?”

This report from The Canadian Press was first published on April 11, 2022.