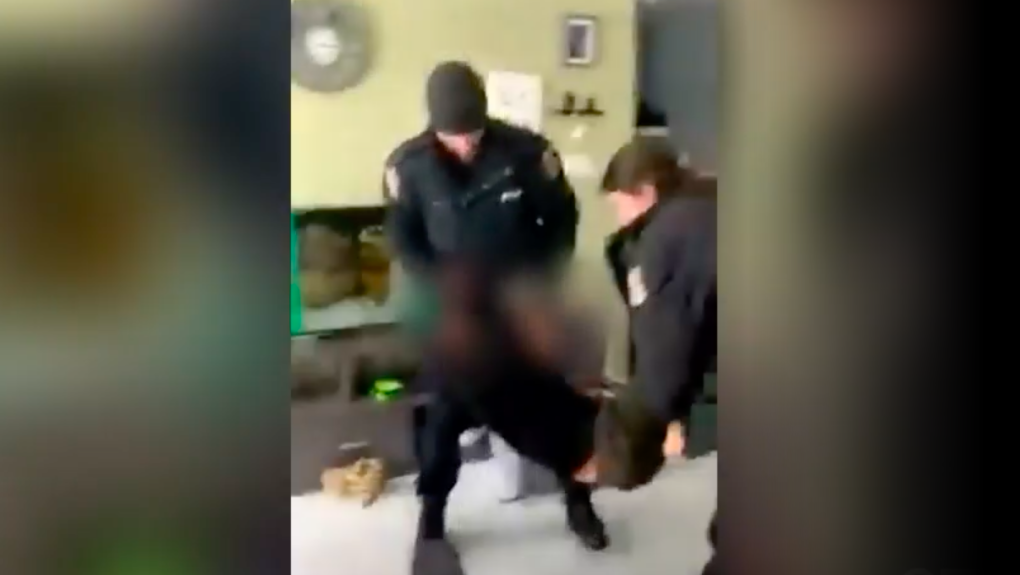 In a video that circulated widely this week, an Inuit child cries as police drag him barefoot away from a visit to his mother’s home in Quebec’s Far North.

The video, posted on Facebook by the seven-year-old’s mother, has racked up thousands of shares and people demanding better treatment by youth protection, particularly in the north, where a much higher proportion of children are under this type of care. .

Dozens of residents of Nunavik, Quebec, where the video was taken, called it an overreaction, with some saying it’s not particularly apt given the region’s history.

“The DYP… it’s the new boarding school,” commented one woman.

“It makes me boil inside,” another person wrote. “Regardless of the situation, it’s abuse.”

Quebec’s youth protection system, which has a branch overseen by the Nunavik government, said it is “extremely rare” to involve the police in such cases, but it does happen when all alternatives have been been exhausted.

The mother who posted the video, who CTV is not naming to avoid identifying her son, said in an interview that it all happened very quickly.

The boy was simply crying because he didn’t want to end the visitation after living with her until just two months ago, she said.

“I didn’t want to be stopped, so I just recorded and stayed calm,” the 30-year-old said.

“It broke me to pieces.”

In the video, as the boy screams and a youth protection officer stands nearby, two police officers grab him by the arms and ankles and carry him, hammock-style, to the door and descend the stairs.

The mother films from a window as they put him in the back seat of a truck, with the boy still crying. He is not wearing socks, shoes, or a jacket as they carry him outside.

Even if there was no time to allow him to calm down, there was no need to drag him around like this, she said.

“I mean, this big officer, the cop type, he could have just picked it up and put it on his shoulder,” she said.

“Instead they went…like he was a criminal or something. He’s only seven years old. He doesn’t deserve this.”

But she says a more reasonable response would have been to let him adjust to the idea of ​​leaving. She is also fighting to regain full custody, after only briefly losing it, she said.

The two were visiting the woman’s cousin, who is in a small town in Nunavik where the boy lived, but not in their hometown.

In late February, the boy was sent to live with his grandfather because the mother, who is on probation, missed calls and recordings, she told CTV. On March 13, she was sent to prison for about a month over the probation issue, before going to a facility in Laval, near Montreal, she said.

In the meantime, Quebec’s Youth Protection Department (DPJ) system has placed the boy in foster care, where he still lives.

The past few months have been devastating for the whole family, she said, and even impossible to talk on the phone.

The woman put CTV in touch with her two attorneys, who are working on the child custody situation, but they could not comment immediately to confirm the details of her case.

She said she had no idea how long it would take to regain custody. “That’s when they started taking it,” she said.

When asked for comment, the DYP forwarded the request to the Nunavik Social Services Agency, which said police involvement is rare, but it is not done lightly.

“What is seen in the video is not standard procedure. However, in rare cases where all else has been attempted unsuccessfully, police support may be requested,” the agency wrote.

“It should be noted that before we get to that, a wide range of methods and measures are taken; police involvement is certainly not the first.”

Whether or not police are involved is also “considered with supervisors”, they said.

“Decisions to go this route are extremely rare, not taken lightly, and do not represent common practice.”

The Nunavik police chief could not be reached for comment on Wednesday.

The woman disputed the number of actions taken before they involved the police, who either arrived with the social worker or immediately afterwards, she said.

“They just came like that without telling me,” she said.

The DYP agent “tried to put his jacket on [and] my son didn’t want to, because he didn’t want to leave me, so the cops forced him and my son fought back,” she said.

A major 2019 report on Quebec social services and Indigenous peoples found there was an “absence of statistical data” on the number of children in non-family care in Nunavik, but the rates are much higher. higher than among non-Aboriginal children.

In a single year, in a territory that then had just over 13,000 inhabitants, 2,137 child protection reports were received in 2016 and 374 Inuit children were placed in alternative protection.

Testifying for the report, the director of the Nunavik DYP said that one in three Inuit children had been in contact with youth protection at some time during the previous year, according to APTN.

Each response worker averaged 45 cases at the time, the agency’s co-director said at the time, APTN reported.

“The provincial average is 18 files per worker, so obviously there are issues that affect the quality of services,” she said.

The mum who filmed this week’s video said that despite her anger she was still surprised at the reaction it got – but it helped her through the tough week, she said.

“A lot of people comforted me through messages… saying they were hurt too,” she said.