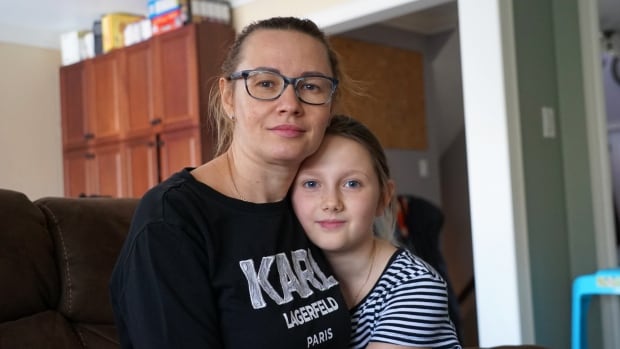 A mother and daughter from Ukraine thought they had secured accommodation in Canada to escape war in their home country. But they ended up being cheated out of $2,000 and stranded at the Toronto airport.

Alena Neklyudova and her nine-year-old daughter, Sasha Volkova, left their family behind, including Neklyudova’s husband and a 19-year-old son, who were drafted to fight for Ukraine during the Russian invasion.

While still in Ukraine, they shuttled from place to place to avoid war, sheltering from bombs in a friend’s apartment building or in random basements.

“I still have nightmares about it,” Sasha told CBC Kitchener-Waterloo.

They traveled through Moldova, Romania and Bulgaria before ending up in Turkey – all in one night – before catching a flight to Toronto in March.

But when they landed at Pearson International Airport on March 17, no one was there to greet them, and it became clear whoever had taken their money would not show up.

With nowhere to go, Neklyudova posted a frantic message on the Canada-Hosts Ukrainians Facebook page, asking for help.

Dozens of people responded to his post, including “Sergey” in Cambridge, Ont. CBC News has agreed to grant him confidentiality due to safety and security concerns.

Sergey discovered Neklyudova’s post while browsing through various Facebook groups to find out how he could help the refugee effort in Ukraine.

“It was literally an SOS call, like ‘Save us’ because they really had nowhere to go,” he said.

Sergey speaks Russian and also has relatives in Ukraine who were affected by the war. He said after a quick introduction and exchange of information, he drove to the airport the following day to pick up the pair.

“When she came here, the two of them looked confused,” he said.

“Like, ‘Where are we? What are we doing here? Should we maybe go back?'” Sergey said, translating for Neklyudova.

“They started to smile”

Neklyudova and her daughter have been living with Sergey and his family of six for almost two weeks. He helped her settle in, whether it was driving them on dates or enrolling Sasha in school.

Sasha said she was excited to go back to school but admits she’s a little nervous. Neklyudova is also looking forward to finding work and improving her English.

“I am very happy,” Neklyudova said from her connection with Sergey and his family.

“They actually started smiling after being here and bonding with some people in the community and even our neighbors,” Sergey added.

Neklyudova said she was grateful for the support from the community since their arrival in Cambridge and hopes she can be reunited with her family once things settle down in Ukraine.

“No pilots, no planes”: Why a small regional airline is cutting the service people in Eastern Quebec rely on

COVID-19 in Quebec: Announcement of the mask mandate to come on Tuesday