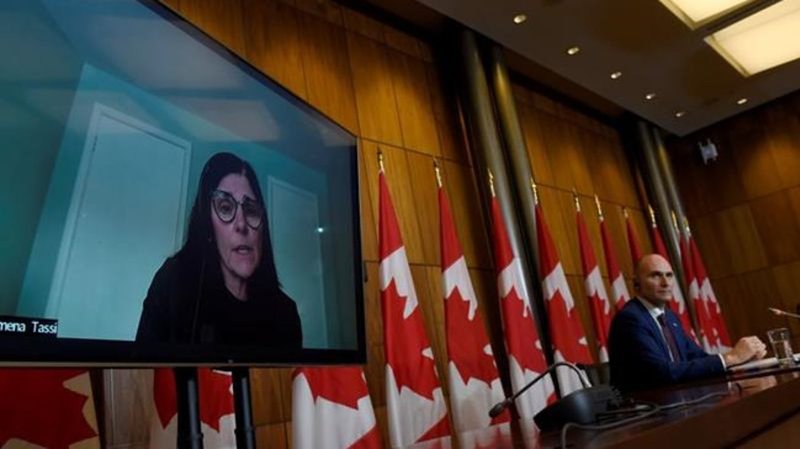 A look at the latest COVID-19 developments in Canada

– A major union representing public sector workers says it is open to temporarily transferring members to help with the overburdened healthcare system, but says it was not given enough advance notice and is being burdened -even facing labor shortages. The Quebec government is looking for public sector workers to temporarily fill more than 2,000 health care aide positions, the health ministry announced Monday. But the government did not make its request until Friday, said Christian Daigle, president of the Quebec Public and Parapublic Service Union, adding that workers had until Monday evening to express their interest.

– Alberta’s health minister has tested positive for COVID-19 and provincial hospitalizations exceed 1,000 patients for the first time since September as the Omicron variant spreads rapidly. Minister Jason Copping said on social media that he tested positive in a rapid test after showing mild symptoms last week and was self-isolating at home. Provincial figures show 94 patients receiving intensive care – a jump of 13 from before the weekend. The death toll rose by 23 people, including a child between the ages of five and nine – one of the youngest deaths from COVID-19 ever recorded in the province.

— Canada’s largest airlines and its busiest airport are calling on the federal government to drop its rule requiring vaccinated travelers to test themselves on arrival for COVID-19. In a letter to Ottawa and the Ontario government, Air Canada, WestJet and Toronto Pearson Airport called for a transfer of testing capacity from airports to the community. “While the government has stepped up testing at airports for international arrivals, we have seen frontline workers struggle to get PCR tests and lab processing capacity is drastically declining,” the letter said, citing the schools, hospitals and long-term care homes as particular priorities. . “There is a growing gap between resources allocated to asymptomatic travelers and those most in need.”

– Some Manitoba students walked out of class on Monday, the first day after a long vacation, to protest what they said was an unsafe environment as COVID-19 numbers continue to rise. “A lot of them want to go to school. They want to be in school, but they want to feel safe,” Piper Lockhart, 16, said of her peers. “Teachers aren’t getting the resources to have safe classrooms.” Lockhart was one of the organizers of the protest which was planned at dozens of schools across the province. She was one of half a dozen students who left Louis Riel College while most remained in class.

– BC’s top doctor has extended a COVID-19 order that will keep gyms and fitness centers closed before providing more details tomorrow. That’s when the restrictions were due to expire, but Dr Bonnie Henry said last week they believed COVID-19 hospitalizations were set to increase after cases in the community peaked . Restrictions on gatherings and events will remain in place, and Henry has also ordered school boards to collect information on the vaccination status of their staff. The British Columbia Teachers’ Federation says on Twitter that it was not consulted or informed in advance of the order.

— Nova Scotia has become the first province in Atlantic Canada to reopen its schools to in-person learning. Students at about 400 public schools across the province had been learning remotely since Jan. 10 due to the threat to public safety posed by the Omicron variant. Nova Scotia Teachers Union President Paul Wozney said the government has not done enough to ensure students and staff are protected from COVID-19, especially since officials will not carry out contact tracing in schools.

– Prince Edward Island health officials are reporting 231 new cases of COVID-19, including new infections at two long-term care facilities. Chief Public Health Officer Dr Heather Morrison said there had been an average of 215 new cases a day over the past week. There are 1,934 active cases reported on the island.

– Officials in Newfoundland and Labrador are waiting at least another week to ease public health restrictions following an increase in COVID-19 cases that began in late December. Health Minister John Haggie said the province will remain at Alert Level 4, which requires all households to limit contact to 10 people, among other rules. The province moved to Alert Level 4 on January 4 and will remain there until at least January 24, when officials will review the restrictions again.

This report from The Canadian Press was first published on January 17, 2022.