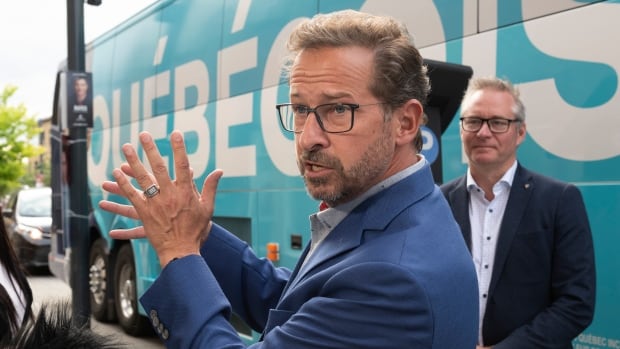 In a bowling alley in eastern Montreal on a weekday afternoon, RÃ©al Desrochers plays in his weekly league and also reflects on his choices in next week’s federal election.

Desrochers had planned to vote Liberal, but a key moment in last Thursday’s Anglophone leaders’ debate galvanized feelings of identity in Quebec and prompted him to change his mind and choose the Bloc QuÃ©bÃ©cois led by Yves-FranÃ§ois Blanchet.

â€œFor me, it’s because the Bloc will balance the situation in Ottawa,â€ said Desrochers. “I know he will not form a government, but he will defend Quebec [in Parliament]. ”

Desrochers called the moment “a direct attack on Quebec, and I don’t like that”.

Last Thursday, at the start of the English-speaking leaders’ debate, moderator Shachi Kurl asked Blanchet why he supported Bills 21 and 96, respectively the law on secularism in Quebec and its new bill to protect the French language.

â€œYou have denied that Quebec has problems with racism, but you are defending laws like Bills 96 and 21, which marginalize religious minorities, anglophones and allophones,â€ Kurl asked.

â€œQuebec is recognized as a distinct society, but for those outside the province, please help them understand why your party also supports these discriminatory laws.

Blanchet retaliated by saying, “The question seems to imply the answer you want.”

â€œThese laws are not about discrimination. They relate to the values â€‹â€‹of Quebec, â€he declared.

Even though Blanchet was visibly frustrated, it seems the majority of Canadians thought the moderator’s question was fair.

According to a LÃ©ger poll released Wednesday, 69 percent of Canadians living outside Quebec believe Kurl’s question was appropriate, while only 12 percent believe it was not.

WATCH | The Premier of Quebec criticizes the issue of the debate on the law on secularism:

According to the same survey, 65% of Quebecers consider the question inappropriate.

The exchange had the effect of rekindling an old wound, leaving Quebecers to feel disrespectful and misunderstood by the rest of Canada, according to several experts interviewed by CBC.

This has created a situation in which a debate that is generally almost ignored in Quebec may have been a game-changer for the federal election on the ground.

A rebound for the Bloc

The Bloc QuÃ©bÃ©cois returned from its fall in the polls to a level of popularity similar to that it enjoyed in the 2019 election, in which it had a dramatic comeback, winning 32 seats after being reduced to 10 in the previous election.

According to another LÃ©ger poll released earlier this week, the party fell from 27 percent to 30 percent of voter support in the province after the debate in English.

â€œQuebeckers are fed up with Quebec-bashing in generalâ€¦ I think there is a misunderstanding of the major issues and debates in Quebec.

WATCH | Quebec columnists explain why the debate in English irritated some Quebecers:

How did Quebec react to the debate of the British federal leaders?

Lachapelle doubts that increasing Bloc support will make a huge difference in which party will ultimately form a government, even if it downplays the already slim chances of the Liberals and Conservatives of forming a majority and reduces the NDP’s chances of forming a government. make gains in the province to almost nil.

For Christian Bourque, executive vice-president of LÃ©ger, however, this small rebound – accompanied by the Liberals overtaking the Conservatives in the polls this week despite the support of Erin O’Toole by Prime Minister FranÃ§ois Legault – could lead to surprises on Monday. evening.

â€œWe’re all in this kind of dominoes because the race is so close,â€ said Bourque.

There are about 15 three-way races between the Bloc, the Liberals and the Conservatives, he said.

â€œSince 2011, Quebec is, around Canada, probably the region where we have the most strategic voters, who will change alliance depending on how they think the race is going,â€ said Bourque.

Lise ThÃ©riault says she has voted for the NDP since the so-called Orange Wave in 2011, but this time she went to the advance vote to vote for the Bloc the day after the English debate.

â€œTell me, at 70, that I am a racist because I want to be proud of my French language? No, that doesn’t work. It doesn’t work, â€said ThÃ©riault, easily switching from English to French.

“I was insulted, and Monsieur Blanchet did a good job. I am 100% behind him.”

Lachapelle says that many Quebecers have had a similar reaction. He too thinks that English-speaking Canadians are poorly informed about the nuances of Quebec issues.

â€œWe generally have a pretty good idea of â€‹â€‹what’s going on in the other provinces of Quebec, but the reverse is not always true,â€ he said.

ThÃ©riault lives in the Montreal riding of Rosemont-La-Petite-Patrie, the last NDP seat in the province, held by incumbent Alexandre Boulerice for 10 years. She said this year she was proud to vote for 21-year-old Bloc candidate Shophika Vaithyanathasarma.

In an interview with CBC this week, Vaithyanathasarma said her own feelings about Bill 21 are complicated.

She supports the bill but fears that there isn’t enough diversity of candidates and politicians participating in the conversation about it.

“This is one of the reasons I get involved in politics: none of the people talking about the bill are racialized,” Vaithyanathasarma said. “I seriously think that we have to listen to the citizens who are concerned.”

Vaithyanathasarma, whose parents immigrated from Sri Lanka, said minorities should not be left out of the discussion.

â€œThis is one of the biggest mistakes we can make,â€ she said with a smile.

Mireille Paquet, Research Chair in Immigration Policy at Concordia University, said As it happens the question served Blanchet because “it allowed Blanchet to speak as if he represented all Quebecers, and as if Quebecers were all united around these laws”.

The conversation over the debate overshadowed another important development in the federal race in the province.

Hours before the English debate, Legault publicly took a stand against Liberal Leader Justin Trudeau, saying Quebeckers should “beware of three parties: the Liberal Party, the NDP and the Green Party”.

Legault was upset by the intentions of these parties to intervene in health issues, which are under provincial jurisdiction, and declared: â€œFor the Quebec nation, Mr. O’Toole’s approach is good.

WATCH | The Liberals react to Legault’s support for O’Toole:

The Liberal Party is fighting back in Quebec following Prime Minister FranÃ§ois Legault’s support for a Conservative government, in particular by opposing the controversial Bill C21. 2:33

But Lachapelle, the Concordia professor, says Legault’s approval could backfire. Many Quebeckers have complained about being told who to vote for. The Conservatives have lost ground in Quebec since the approval and are now at 18.4 percent of the polls, according to 338Canada founder Philippe Fournier.

Voters for Legault’s Coalition Avenir QuÃ©bec party are generally divided between Bloc QuÃ©bÃ©cois, Liberals and Conservatives at the federal level. Legault’s bet may have alienated a good deal of it, Lachappelle said.

“Legault risks losing part of his base, especially if the Conservatives win and do not hold [on their promises to Quebec]. “

Yet, as the dust settles over the debate and its controversy, polls suggest that Quebecers may end up voting in the same direction as in 2019.

“I have the impression that we are going to have a result similar to that of the last elections,” he said.

Leger conducted an online survey of 1,000 Canadians aged 18 and over. It is not possible to calculate a margin of error on a panel sample. However, by way of comparison, the maximum margin of error for a sample of 1,000 respondents is plus or minus 3.1%, 19 times out of 20. The margin of error for information that specifically concerns Quebec is greater. high, given the smaller sample size. .

Joe Ortona: Stop the name calling, Mr. Legault, and focus on the problems