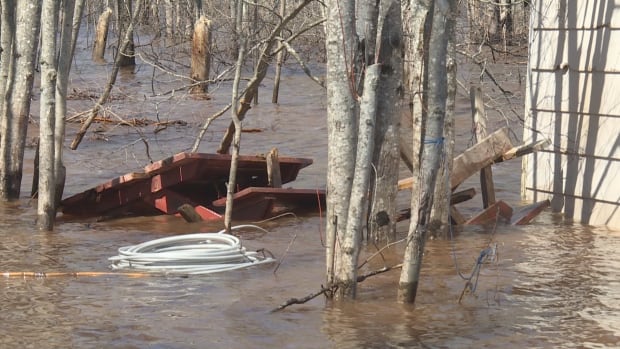 Caroline Blakely and 13 other volunteers found a tangled refrigerator about 300 meters deep in the woods, along with children’s toys, fishing rods, roofs, water heaters and wood on the western shore of Grand Lake .

The waste was likely from floods in 2018 and 2019, where record high water levels destroyed homes and displaced more than 1,100 residents along the St. John River and nearby lakes.

Some residents have claimed items that ended up during the Nature Conservancy of Canada‘s cleanup over the weekend at what’s called the Keyhole property behind Princess Park. The rest was sent to a landfill.

The land trust recently acquired the 173-acre property and wanted to clean up debris that washed ashore or was scattered in the woods during flooding.

“So we really want to make sure the trees have the best possible environment to grow and thrive on our property,” said Blakely, one of the main organizers of the cleanup.

“We lost a lot of what we had and have. Some trees are 400 years old and are a really unique flood forest,” she said. New Brunswick Turn.

The area’s marshes are also important, especially in an area that tends to flood, he said.

“It allows that land to act like a sponge and hold back some of those waters that would normally flood the property that’s been developed, so it’s really important to conserve that.”

Volunteer Gloria Beyeler is originally from Nova Scotia, but owns a cabin in the area and a passion for helping preserve nature in this region.

“It was very exciting for me to be involved in, you know, helping preserve this and cleaning it up. It’s just fun to be a part of something that’s in your own backyard.”

To prepare for the cleanup, a team of Nature Conservancy of Canada interns used a mapping system to place dots on a map with coordinates of the litter ahead of time to make it easier for volunteers to know where they could help. .

Blakely said one of the reasons she helped organize the cleanup was because she knew how damaging the 2018 and 2019 floods were.

“I think especially when we let people take whatever they wanted, that was a big part of it. It was nice to see people excited about finding things or even just the potential to find things that might have been theirs after the flood.”

Blakely said she lost photographs and the roof of her cottage in the flood, so every year she takes extra precautions.

“Every fall we go in and we take all the photos and stuff, the really sentimental stuff, because I mean, you can always replace the furniture, but you can’t replace some of the photos and the memories that are there.”

The Nature Conservancy of Canada plans to do another cleanup next summer to pick up the rest of the trash.

“There’s still a lot to do in there. So a lot of stuff to take out, bigger stuff that just doesn’t belong in the woods,” Blakely said.