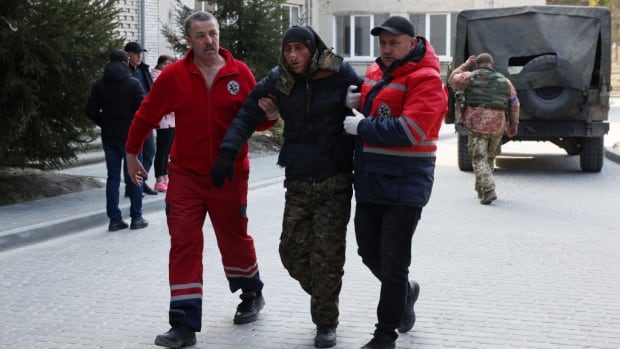 At least 35 people were killed and 134 injured in a Russian airstrike on a Ukrainian military training center near the Polish border on Sunday, regional governor Maksym Kozytsky said in a statement.

Kozytsky, governor of Lviv region in western Ukraine, said Russian forces fired more than 30 cruise missiles at the Yavoriv military facility, 30 kilometers northwest from the city of Lviv and 35 kilometers from the border between Ukraine and Poland. He said some were intercepted before they struck.

The assault brought the war closer to the border with Poland. A senior Russian diplomat has warned that Moscow sees foreign deliveries of military equipment to Ukraine as “legitimate targets”.

Russian troops have destroyed 3,687 Ukrainian military infrastructure so far, Russian Defense Ministry spokesman Igor Konashenkov was quoted by Russian news agencies as saying on Sunday. It was not possible to independently verify his statement.

Since Russia invaded Ukraine, the Lviv region has been largely spared the scale of the destruction that has unfolded further east and has become a destination for residents fleeing the bombed cities and for many of the some 2.6 million refugees who fled the country.

The Yavoriv training center appears to be the westernmost target hit so far during the 18-day invasion. The facility, also known as the International Peacekeeping and Security Center, has long been used to train Ukrainian military personnel, often with instructors from the United States and other NATO nations. .

The Kremlin did not immediately respond to a request for comment on the reported missile strike so close to the border with NATO allies, and a short video briefing from the Russian Defense Ministry spokesman on Sunday did not made no mention of such an attack.

Elsewhere, Russian fighters fired at the airport in Ivano-Frankivsk, a town in western Ukraine 250 kilometers from Ukraine’s border with Slovakia and Hungary.

In Mariupol, which has endured some of the worst punishment since the Russian invasion, efforts to bring food, water and medicine to the port city of 430,000 and to evacuate civilians have been thwarted by constant attacks. More than 1,500 people died in Mariupol during the siege, according to the mayor’s office, and the shelling even halted efforts to bury the dead in mass graves.

Talks aimed at reaching a ceasefire broke down again on Saturday, and while the United States announced its intention to provide Ukraine with another $200 million for weapons, a senior Russian diplomat warned that Moscow could attack foreign shipments of military equipment.

Ukrainian President Volodymyr Zelensky has accused Russia of trying to break up his country, as well as starting ‘a new stage of terror’ with the alleged detention of a mayor of a town west of Mariupol .

“Ukraine will stand this test. We need time and strength to smash the war machine that has descended on our country,” Zelensky said during his nightly address to the nation on Saturday.

Russian soldiers looted a humanitarian convoy trying to reach Mariupol and blocked another, a Ukrainian official said. The Ukrainian military said Russian forces captured the eastern outskirts of Mariupol, tightening their siege of the strategic port. Taking Mariupol and other ports on the Sea of ​​Azov could allow Russia to establish a land corridor to Crimea, which it seized from Ukraine in 2014.

Tanks fire on a building

An Associated Press reporter in Mariupol witnessed tank fire on a nine-story building and was with a group of hospital workers who came under sniper fire on Friday. A worker shot in the hip survived, but conditions at the hospital were deteriorating: electricity was restricted to operating tables and people with nowhere to go lined the hallways.

Among them was Anastasiya Erashova, who was crying and shaking as she held a sleeping child. The shelling had just killed her other child as well as her brother’s child, Erashova said, her scalp covered in blood.

“No one could save them,” she said.

In Irpin, a suburb about 20 kilometers northwest of central Kiev, bodies lay in the open on Saturday in the streets and in a park.

“When I woke up in the morning, everything was covered in smoke, everything was black. We don’t know who is shooting and where,” said resident Serhy Protsenko as he strolled through his neighborhood. Explosions sounded in the distance. “We have no radio or information.”

Kyiv region police say an American video journalist died and another journalist was injured when they were attacked by Russian forces in Irpin.

Police said on their official website on Sunday that Russian troops opened fire on the car of Brent Renaud and another journalist. He said the injured journalist had been taken to a hospital in Kiev.

A New York Times spokesperson said Renaud, 50, was a “talented filmmaker who had contributed to The New York Times over the years”. He stated that he was not working for the publication at the time of his death.

“Although he has contributed to The Times in the past (most recently in 2015), he was not assigned to any Times bureau in Ukraine,” The New York Times said in a statement. declaration.

The news of the death of journalist Brent Renaud is devastating.

In a war fueled by disinformation, the role of journalists is more essential than ever.

My thoughts go out to his family and loved ones.

In several areas around Kiev, artillery barrages sent residents rushing to safety as air raid sirens sounded. The British Ministry of Defense said on Saturday that Russian forces which had been massed north of the capital had closed within 25 kilometers of the city center and had dispersed, likely to support an attempted encirclement.

Oleksiy Kuleba, head of Kyiv regional administration, said Russian forces appeared to be trying to blockade and cripple the capital by shelling suburbs day and night. Kuleba said Russian agents were in the capital and its suburbs, delineating possible future targets.

A convoy of hundreds of people fleeing Peremoha, about 20 kilometers northeast of Kyiv, was forced to turn back as shelling by Russian forces killed seven people, including a child, the Ukrainian Ministry of Health said on Saturday. Defense. Moscow has said it will establish humanitarian corridors out of conflict zones, but Ukrainian officials have accused Russia of disrupting those pathways and shooting civilians.

Ukrainian military and volunteer forces are preparing for an all-out assault on the capital. Kyiv Mayor Vitali Klitschko said on Thursday that around two million people, or half of the metropolitan region’s residents, had left and that “every street, every house is fortified.”

Zelensky said on Saturday that Russia would have to bomb Kiev and kill its inhabitants to take the city.

“They will only come here if they kill us all,” he said. “If that is their goal, let them come.”

In Mariupol, where electricity, gas and water have been cut, aid workers and Ukrainian authorities have described an ongoing humanitarian catastrophe. Aid group Doctors Without Borders said residents were dying from a lack of medicine and draining heating pipes for drinking water.

The war repeatedly raised the specter of nuclear accidents, as fighting took place around nuclear power plants. On Sunday, Ukraine said it had restored a broken power line to the decommissioned Chernobyl power plant, scene of the world’s worst nuclear disaster in 1986. The plant was disconnected from the grid last week and relies on generators.

This has raised concerns about its ability to keep spent fuel cool, although the International Atomic Energy Agency has played down such concerns.

The Russian invaders seem to have struggled far more than expected against determined Ukrainian fighters. However, the more powerful Russian army threatens to crush the Ukrainian forces.

Pope Francis issued his strongest condemnation yet of the war in Ukraine on Sunday, saying the “unacceptable armed aggression” must end.

Addressing thousands in St. Peter’s Square for his Sunday blessing, Francis also said the bombing of hospitals and other civilian targets was “barbaric” and “without valid strategic reason”.

“In the name of God, I ask you: stop this massacre! he said, adding that Ukrainian cities risked “being reduced to cemeteries”.

Unemployment rose in Victoria last month, but remains one of the lowest in Canada – Saanich News